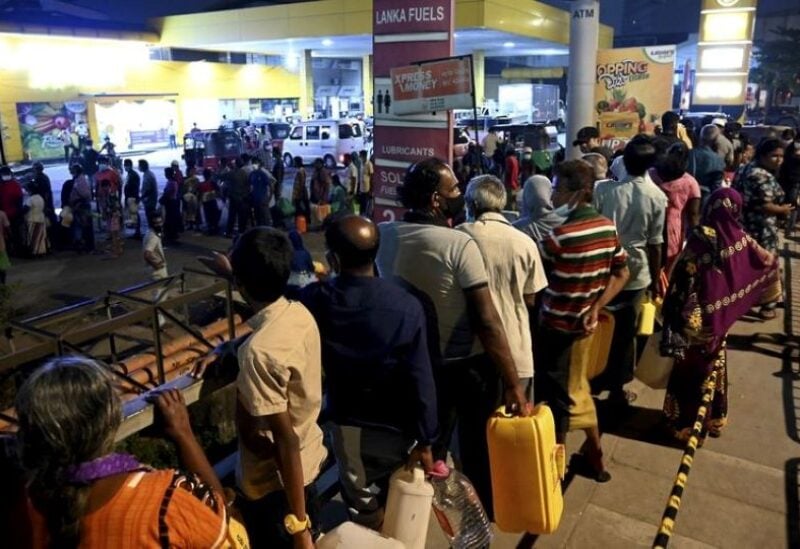 People queue to buy oil for home use at a petrol station in Colombo, Sri Lanka,

Labor and Foreign Employment Minister Manusha Nanayakkara visited the site of the megaproject in northwestern Tabuk province last month during an official visit to the Kingdom.

“NEOM is a futuristic concept and I was blown away by looking at the amount of work that has gone into it,” Nanayakkara told Arab News. “Also, once the project is complete it will trigger a significant transformation in traditional tourism and modern living.”

He added: “NEOM offers a substantial amount of job opportunities in various categories and I am trying to orient as many aspiring migrant workers to capitalize on this.”

Some of the best opportunities were for construction, engineering, IT and urban planning professionals, he said.

“Sri Lanka produces world-class engineers, architects and city planners. They can contribute their technical and creative capabilities. Projects like NEOM are rare in the world and it will be a lifetime opportunity for most of them.”

Sri Lanka is keen to find work overseas for its professionals as it is facing its worst financial crisis since gaining independence in 1948 and in desperate need of foreign currency.

The island nation of 22 million people officially defaulted on its debts in April and without foreign currency reserves has been left unable to pay for imports. Most of its citizens are facing daily power cuts and shortages of basic commodities.

Remittances from Sri Lankans working overseas have long been a key source of foreign exchange for the country.

“(An) Immediate contribution, without a doubt, would be foreign remittance,” Nanayakkara said, adding that involvement in NEOM would also bring long-term benefits for Sri Lankan workers.

“The expertise and experience they gain by being employed by NEOM will add to their credentials as professionals.”