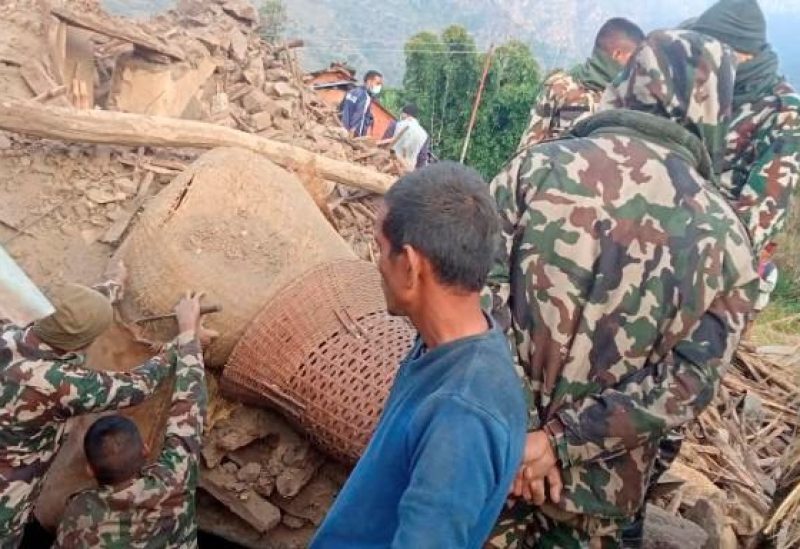 Members of the Nepal army work during a rescue operation at the ruins of a collapsed house, damaged after an earthquake struck early Wednesday, in the western district of Doti, Nepal November 9, 2022. Nepal Army/Handout via REUTERS

The earthquake in the Himalayan nation demolished mud and brick homes, and local TV showed rescuers searching through the rubble for survivors. According to Nepali army spokesperson Narayan Silwal, at least two persons have been reported missing.

Women in the district, about 430 km (270 miles) west of the capital, Kathmandu, were shown sitting in the open with babies wrapped in blankets to shield them from the cold. Volunteers rescued a cow trapped under the debris.

Ram Upadhyay, chairman of the Purbi Chowki rural municipality in Doti, said he was in a nearby village when the quake struck at 2.12 am Nepal time (2027 GMT).

“It shook terribly and I rushed out immediately. Now we are collecting details including the dead bodies,” he said.

Nepal is still rebuilding after two major earthquakes in 2015 killed almost 9,000 people, destroyed whole towns and centuries-old temples and caused a $6 billion blow to the economy.

Prime Minister Sher Bahadur Deuba, who faces re-election later this month, offered condolences to the families of the victims. “I have instructed the relevant agencies to arrange immediate and proper treatment of the injured and the victims.”

A ground rescue team of the army has been rushed to the site, said spokesperson Silwal, and two helicopters were on standby in nearby Surkhet and Nepalgunj towns.

Kalpana Shrestha, a senior bureaucrat of Doti district, said details were being collected from villages near the epicentre and that one child was among those rescued from under the debris.

The quake was centred about 158 km (100 miles) northeast of Pilibhit, a populous city in the neighbouring Indian state of Uttar Pradesh, and occurred at a depth of 10 km, EMSC added. There were no reports of damage on the Indian side, though the quake woke up many residents of the capital New Delhi.