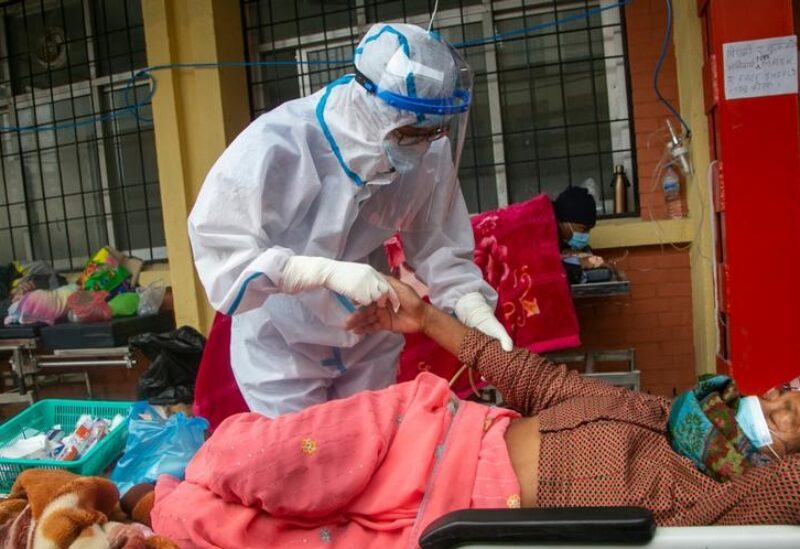 The tally tops the previous high of over 9,300 daily cases in May 2021, when the delta variant tore through South Asia.

The capital Kathmandu and the surrounding valley is the current coronavirus hotspot, with health officials in that region reporting more than half the total of current daily cases.

Virologists estimate that the true number of infections could be much higher than the reported figure as many people remain without proper access to health care, adding that the omicron variant is likely driving the high infection numbers.

In early January, Nepal had reported that at least 22% of the infections were from the new omicron variant.

Sher Bahadur Pun, a clinical researcher at Sukraraj Tropical Hospital in Kathmandu, told DW that the figure could be much higher by now, explaining that it was hard to distinguish which variant caused an infection, as labs are not well equipped and don’t determine which variant was responsible case by case.

However, he added it was clear that the new variant was spreading throughout the community.

Omicron arrives from India
The latest wave of infections began in the second week of January when the number of new infections began to rise exponentially. Before that, the daily average had dropped to the hundreds during autumn.
Krishna Prasad Poudel, Nepal’s chief epidemiologist told local media that the current wave of infections was triggered by the rise in cases in neighboring India, and spread swiftly via border towns, eventually reaching Kathmandu.

“The Omicron variant has been spread to community level,” he was quoted as saying by Himal magazine. “In bordering areas, almost all positive cases were due to omicron.”

Nepal and India share 1,800 kilometer (1,100 mile)-long open and porous border, and thousands of people cross back and forth every day without health controls. In India, daily infection rates have recently topped more than 270,000.

Baburam Marasini, a former director of epidemiology and disease control, told DW that that political conventions held in December also helped spread of both the delta and omicron variants.

Nepal health workers prepare for the worst
Like elsewhere in the world, omicron is putting a strain on health care services, as doctors nurses and other workers contract the virus and miss work.

More than 600 health care workers at the five biggest public hospitals in Kathmandu have been infected in recent weeks.

Clinician Pun cautioned that this could affect the service these hospitals amid a sharp rise in COVID-19 patients at the capital’s hospitals.

Local media has also reported that there is a shortage of basic medications like paracetamol used to treat fever at Kathmandu pharmacies.

Marasini warned the new omicron wave could as fatal as the previous delta variant wave in May 2021 and again overwhelm the country’s health system.

Hundreds of patients died due to lack of immediate medical intervention, including shortages of oxygen, hospital beds and ventilators.
To combat the threat of a new wave, Nepal’s government has issued a vaccine mandate, stipulating that from January 21 onwards, people must prove their vaccination status to access public events, restaurants, hotels or board airplanes.

Authorities have also shut down places like movie theaters, dance bars, religious sites, public parks and gyms until the end of January. No more than 25 people at a time are allowed to gather in shops which still remain open.

The government has faced a lot of criticism over its handling of the pandemic, primarily over slow vaccination rates and lack of proper health screening at border entry points.

As of January 18, only 40% of Nepal’s 30 million people have been fully vaccinated, while around 53% have received at least one shot of the jab, according to the Health Ministry.

Marasini has questioned the logic of the vaccine-card rule, as the majority of the population have yet to be fully vaccinated.

“Had we vaccinated about two-thirds of the targeted populations, we could have imposed such a vaccination mandate,” he said. “Otherwise such instructions will not be followed.”

Vaccine doses ‘disappearing’
Nepal had begun to inoculate its population as early as January 2021, but the vaccination drive stalled because there were not enough vaccine doses or even syringes to administer the shots.

Nepal’s health secretary Roshan Pokhrel told DW that although the initial vaccination drive had been hampered by lack of supply, this was no longer the case.

However, Pokhrel told a parliamentary panel on Tuesday that about 2.5 million vaccine doses from government stocks could not be accounted for, and hinted that the doses could have been unlawfully taken.

And while almost half of the country has yet to receive a single dose of a vaccine, others with access to doses have already taken booster shots.

The government has started providing booster shots for frontline workers, including health professionals, cleaners, and government officials. However, health experts say that overall, these doses need to be prioritized for those who have yet to be vaccinated.