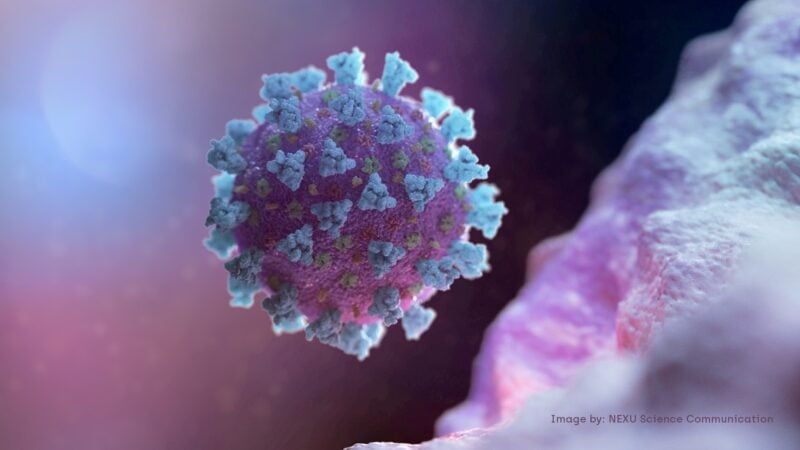 FILE PHOTO: A computer image created by Nexu Science Communication together with Trinity College in Dublin, shows a model structurally representative of a betacoronavirus which is the type of virus linked to COVID-19, shared with Reuters on February 18, 2020. NEXU Science Communication/via REUTERS/File Photo

‘IHU’ new coronavirus variant, has emerged in France amid the rapid surge of Omicron cases across the world.

The B.1.640.2 variant was discovered at the institute IHU Mediterranee Infection. Researchers believe that it contains 46 mutations. This has more mutations than the Omicron variant of COVID-19.
The new variant has been associated with the African country Cameroon. France has reported at least 12 cases of this variant.
US epidemiologist and health economist Eric Feigl-Ding took to Twitter and ”rung the bell” about the variant.
”These observations show once again the unpredictability of the emergence of new #SARSCoV2 variants and their introduction from abroad, and they exemplify the difficulty to control such introduction and subsequent spread.”

The variant can be identified using careful PCR analysis of signals that are different from Delta and Omicron.
However, Feigl-Ding has highlighted that ”There are scores of new variants discovered all the time, but it does not necessarily mean they will be more dangerous. What makes a variant more well-known and dangerous is its ability to multiply because of the number of mutations it has in relation to the original virus.”
It comes after French health minister Olivier Veran said that the country expects to see even higher daily counts of new COVID-19 infections.

“I said that maybe – maybe – this is the last wave, meaning that considering the number of infections in our country and around the world, it’s probable that we will have developed a form of immunity, either through vaccination or through getting infected, or both,” he said.