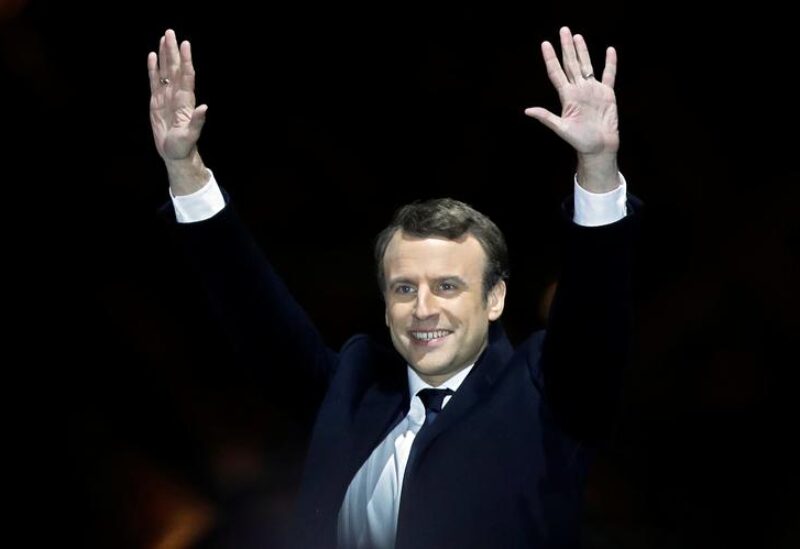 French President-elect Emmanuel Macron celebrates on the stage at his victory rally near the Louvre in Paris. REUTERS/Christian Hartmann

Although in France’s recent presidential election, President Emmanuel Macron’s chief opponent was far-right leader Marine Le Pen, the main challenge for France’s head of state in the country’s upcoming parliamentary elections, is coming from the left — in the form of a newly set up bloc called Nupes, a French acronym for “Nouvelle union populaire ecologique et sociale,” or the New Ecological and Social People’s Alliance.

The suburb of Chevilly-Larue, in the south of Paris, could become one of the new alliance’s strongholds.

On a recent Saturday afternoon, the 19-year-old rapper Lazak was singing on a small stage, right in the middle of a few residential blocks. “We are the city!” he chanted into the microphone while bobbing up and down, waving one arm to the rhythm.

The concert was part of a local event, where visitors could buy sausages or play chess in adjacent pavilions.

A few dozen bystanders in front of the stage were joining in the singing, some of them also with one arm up in the air. Amongst them Rachel Keke, a Nupes candidate in this county, Val-de-Marne.

“We need members of the working class to defend our interests in parliament,” she later told DW, as she was sitting on a bench in a nearby park, not far away from the apartment in one of those residential blocks where she’s living with four of her five children.
It’s the first time the 48-year-old native of the Ivory Coast is running as a political candidate. Keke first arrived in France in 2020 and also has French nationality.

She works as a chambermaid at an Ibis hotel in northern Paris. She and her colleagues made national headlines last summer when they forced the international chain that owns the Ibis, Accor Hotels, to meet some of their demands after striking for 22 months.

“Nupes’ platform is tailor-made for people like us,” she added.

The left-wing alliance aims to increase the minimum wage from currently roughly €1,300 to €1,500 net per month, bring the retirement age down to 60 from 62 and to block price rises for gas and certain basic products.

Those are the arguments that Keke was putting on the table that afternoon to try to convince the inhabitants of Chevilly-Larue to vote. Here, the poverty rate is several points above the national average.

One of the locals listening was 36-year-old Ruphin Olle Nne. “It’s getting increasingly difficult to make ends meet with our small wages. But are you sure that things will change with Nupes in power?” asked the doctor’s assistant, a mother of two with a third child on the way, as she perused the Nupes flyer.

“I think we can change things but for that we’ll need your support,” Keke answered.

Olle Nne nodded approvingly. “That makes sense,” she said. “After all, you’re one of us and know what our daily life is like.”

Just then, two young men passed by. “We’re on your side, we’ll vote for you,” they shout out to Keke, showing her two thumbs up. She smiled and waved back.
Jean-Luc Melenchon, head of the Nupes alliance, is hoping for more such support. The 70-year-old came third in the first round of April’s presidential election with his far-left party, La France Insoumise, or LFI, scoring almost 22%. Current President Emmanuel Macron was eventually reelected in the final vote against far-right contender Marine Le Pen.

But in the parliamentary elections, Le Pen’s party could only get 40 of the 577 seats available, according to polls. This is partially because it doesn’t have localized candidates. That is why in this field, Macron’s main opponent is Melenchon.

Nupes’ common manifesto features wide-ranging measures for the protection of the environment, as well as women’s and immigrants’ rights. Nupes is also planning on nationalizing banks and energy companies and establishing a job guarantee for everybody. The manifesto also includes LFI’s ambition to back away from certain EU rules and to leave the NATO military alliance.

Melenchon hopes to make that manifesto work on a national level.

“Elect me as your prime minister,” he has told voters, stressing that a Nupes victory in the parliamentary elections would mean that Macron would have to choose him as prime minister. After all, he argues, parliament has the power to revoke the government and it would do so, if Macron were to choose someone else for that job.

But Macron is determined not to have to do that. “No party can impose the name of a prime minister on the president,” he recently told regional newspapers.