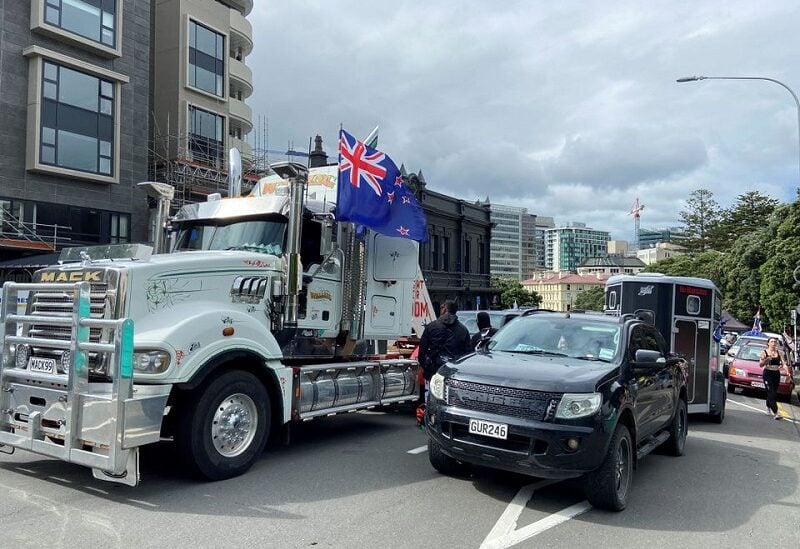 Inspired by truckers’ demonstrations in Canada, several thousand protesters this week blocked streets near the parliament in capital Wellington with trucks, cars and motorcycles.

A country of five million people, New Zealand has reported just over 18,000 confirmed cases and 53 deaths since the pandemic began. About 94% of eligible people are vaccinated, with shots mandatory for some staff in frontline jobs.

The country’s borders are still closed, however, with tens of thousands of expatriate New Zealanders facing being cut off from families. Tourism businesses are struggling to stay afloat.

Prime Minister Jacinda Ardern on Thursday told the protesters to “move on”, saying the protests are not a reflection of what the majority in the country feels. As of 8.00 p.m. (0700 GMT), protesters remained at the site, defying warnings and efforts by the police to clear them.

It has been three days since the protesters blocked roads and set up camp at the parliament grounds.

“All of us want to actually move on. We are working very hard to put ourselves in the best possible position to do that,” Ardern told reporters after visiting a vaccination centre in Auckland.

Ardern acknowledged every New Zealander had the right to protest, but said that should not disrupt others’ lives. Removing protesters was an operational matter for police, she said.

Despite garnering plaudits for keeping the country virtually virus-free over the last two years, the strict restrictions now in place have become unpopular, with Ardern’s approval ratings taking a hit in recent opinion polls.

“Jacinda (Ardern) has turned her back on us,” said a protester, identifying himself as Dave.

“Kiwis are not dumb. We are losing our jobs and our lives due to these mandates and restrictions,” he said.

Speaker Trevor Mallard on Thursday authorised the closure of grounds around the distinctive ‘Beehive’ parliament building, after which demonstrators quickly confronted police officers, banging drums and screaming insults. Some were seen throwing empty plastic bottles at the police.

“Hold the line,” protest organisers shouted over microphones while some others chanted the Maori haka.

As the crowd pushed against barriers, police pulled them out and wrestled them to the ground, a Reuters witness said. Dozens were handcuffed and taken away amid cries of “Shame on you!” from the crowd.

Police used pepper spray on some protesters after officers were pulled into the crowd but no serious injuries were reported, a police statement said.

Police said those arrested will face trespass and obstruction charges, and will be bailed to appear in court.

Many protesters, who said they were vaccinated but were against mandating shots, were seen holding placards saying “Freedom”, “Leave our kids alone” and “Let me work”.

“We are not going anywhere,” said one demonstrator who gave his name only as Adam, and said he had come from Palmerston North, about 140 km (87 miles) north of Wellington.

“We will hold the line and see this through,” he said.