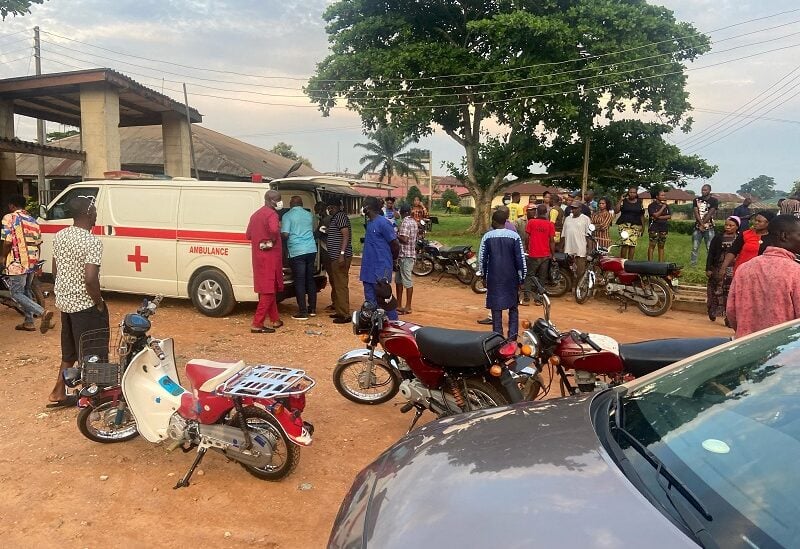 Relatives of churchgoers who were attacked by gunmen during Sunday's church service gather as health workers attend to victims brought in by ambulance after the attack at St. Francis Catholic Church, in Owo, Nigeria June 5, 2022. REUTERS/Stringer NO RESALES. NO ARCHIVES

50 people at least were killed when gunmen opened fire at a Catholic church located in the southwest part of the country during mass on Sunday, said the Nigerian government.

According to Funmilayo Ibukun Odunlami, police spokesperson for Ondo state, the gunmen had carried explosives, and the cause of the rare attack is being investigated.
Calling the incident “a great massacre”, Ondo state Governor Arakunrin Oluwarotimi Akeredolu visited the scene of the attack and injured persons in the hospital.
Catholic Church spokesman in Nigeria, Reverend Augustine Ikwu said “It is so sad that while the Holy Mass was going on, unknown gunmen attacked St Francis Catholic Church…leaving many feared dead and many others injured and the Church violated.”
The attack, which took place on the Christian holiday of the Pentecost, was condemned by Pope Francis who said that he will pray for the victims and Nigeria.

Slamming the “heinous killing of worshippers,” President Muhammadu Buhari said the victims will get justice.

Nigeria, where jihadists and criminal gangs operate in other regions, is battling a 12-year-old jihadist insurgency in the northeast.

With a mostly Christian south and a predominantly Muslim north, attacks on religious sites are particularly sensitive in Nigeria where tensions sometimes flare between communities.

Mass gun attacks like Sunday’s violence are rare in the country’s relatively peaceful southwest even though kidnapping assaults are common in most parts of Nigeria, which is Africa’s most populous country and the continent’s largest economy.