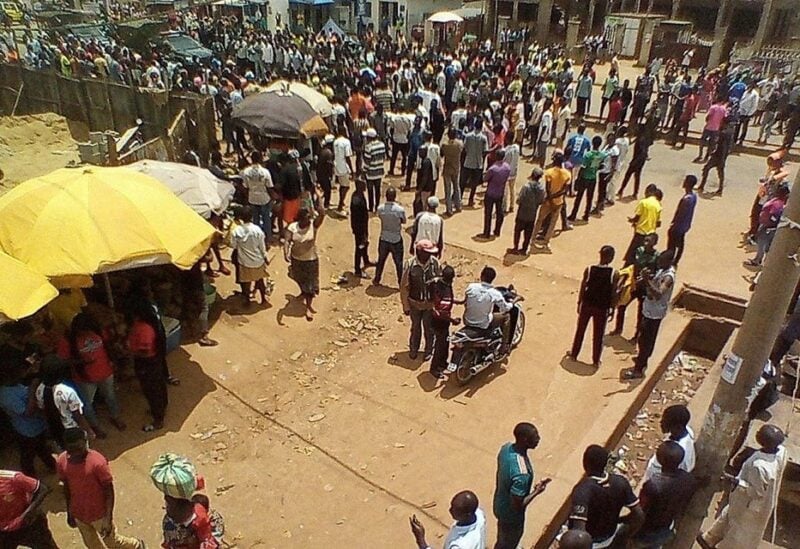 People take to the street of Kaduna to protest against another overnight kidnap of 16 people in Chikun local government area Kaduna, Nigeria, on July 8, 2021. (Reuters)

Parents of the most recent group of students abducted in northern Nigeria are calling for international pressure on the government to help stop a series of kidnappings since December that have seized nearly 1,000 students.

Angry residents in Damishi in Kaduna state marched in the streets this week, demanding peace. The small group of protesters said at least 16 people were kidnapped on Wednesday, just two days after gunmen stormed the Bethel Baptist High School early Monday and abducted at least 121 students.

“We are still mourning the Bethel school students and now this happened,” said Habib Lukeman, standing near a barricade. “We don’t want bad government, we don’t want them. They should bring back our children.”

Parents of the kidnapped students gathered inside the school, crying, praying and demanding justice.

“We need the international community to help and speak to the government,” said Joseph Jeremiah, a pastor whose 14-year-old girl was abducted. “When we are talking of pain, we know what it is, what it has caused, when you miss one of your family.”

Solomon Danbeki, the vice-chairman of the school’s parent-teacher association, worried about the poor security.

“The armed bandits came with sophisticated weapons, but the vigilante security personnel in the school only had guns. There couldn’t have been anything they could do to save our children,” he said.

Such school abductions are becoming common in northern Nigeria.

The U.N. children’s agency estimates at least 950 students have been abducted by gunmen since December, with more than half of the abductions occurring in the past six weeks.

“This situation really has a tremendous impact,” said Emmanuel Nandang, principal at Prelude Comprehensive College in Kaduna city. Parents don’t allow their children to travel or leave home to study because they are scared of what could happen, he said.

With fewer students, the budgets of some schools have been reduced and they have been forced to fire teachers. “This situation affects the entire population,” Nandang said.

The abduction at Bethel Baptist High School is the fourth in Kaduna state in the past six months. There have been seven mass kidnappings of students in Nigeria this year. The gunmen seek ransoms.

Analyst Malam Bashir Mohammed has attributed the rise of kidnappings to poverty, unemployment and greed.

Mass abductions from schools in Nigeria have increased significantly since 2014, when Boko Haram extremists abducted 276 female students from a school in Chibok in northeastern Borno state.

Brig. Gen. Sani Kukasheka, a retired army officer, has blamed the kidnappings on the ransoms paid, saying the government and security agencies are failing to trace the payments to apprehend collaborators in the communities.