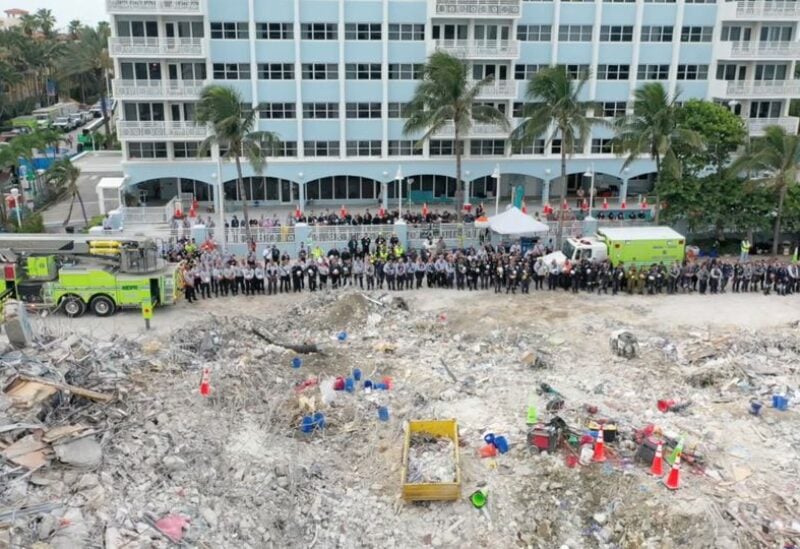 Members of the search and rescue team stand during a moment of silence in front of the rubble of the collapsed Champlain Towers South building in Surfside, Florida, U.S. July 7, 2021, in this still image taken from drone footage obtained from social media. Mandatory credit MIAMI-DADE FIRE RESCUE/via REUTERS

It was the dreaded end that all had feared.

Fourteen days after a seaside condominium tower collapsed just north of Miami, rescuers said their mission was no longer one of rescue, but had shifted to recovery. There were no survivors.

“My sister and my brother-in-law were – are – in that building right now,” said Martin Langesfeld, speaking at an impromptu memorial late Wednesday night a few hundred yards from the rubble, as the reality of vanquished hope set in.

Langesfeld, 23, said he still could not put his emotions into words. He looked bewildered that he would be there, standing before a pile of rubble, talking about his newly married sister, Nicole, buried underneath. How could this be?

“I want to truly say thank you,” Langesfeld said, looking into the eyes of the search and rescue team members standing a few feet away, whom he commended for putting their “blood, heart and souls” into trying to find his sister alive.

“We didn’t get the outcome we wanted,” he continued. “But we did become a family.”

For Langesfeld and so many other family members of the victims, Wednesday was a brutal day of trying to come to terms with their loved one’s unfathomable fate. There would be no miracle survivors pulled from the rubble of the Champlain Towers South, which collapsed on June 24, burying scores of people.

So far, authorities say they have recovered 54 bodies. Another 86 people remain missing and feared dead. There is no immediate explanation for the building’s collapse, though investigations are focusing on a 2018 engineering report that warned of structural deficiencies.

The building fell so forcefully that rescuers could find no “voids” or pockets where people might survive for days – as has happened in some other cases around the world, where structures were felled by earthquakes or hurricanes.

Fire officials said on Wednesday that one section on the north side of the collapsed building saw four floors – normally representing at least 40 feet of vertical space – pancake into just three feet, crushing everyone and everything in between.

Not once has a rescue dog sounded an alert that a survivor was under the massive heap of concrete and rebar. Not once, fire department officials said on Wednesday, has their sensitive equipment detected any sign of life.

It fell on Ray Jadallah, the assistant chief of Miami-Dade Fire Rescue, to explain to families during a Wednesday afternoon meeting that there was no longer any realistic hope of locating survivors.

As Jadallah spoke to families, he emphasized that the greatest care would be taken by those working on the site to gently find all human remains. He said his team’s mission was to reunite everyone with their family members under the rubble so they could find some peace and closure.

“I reassured them that just because we transitioned to a search and recovery, doesn’t necessarily mean that the trucks leave, that everyone leaves and everyone forgets the families,” he said.

All search and rescue operators who were working the site left the rubble Wednesday night and gathered together for a moment of silence. Those gathered looked exhausted. Few shed tears or betrayed any emotion. They stared resolutely at the pile of concrete and twisted rebar before them, appearing ready to get back to work.

Surfside Mayor Charles Burkett said the shift of the operation to one of recovery was “a body blow” to all involved.

Still, in his grief, he could not but help but betray the tiniest flicker of hope.

“Nobody knows for sure, with absolute certainty, that there’s not still somebody waiting to get out of that pile,” he said, looking in the direction of the rubble. “I think everybody here believes that, too.”