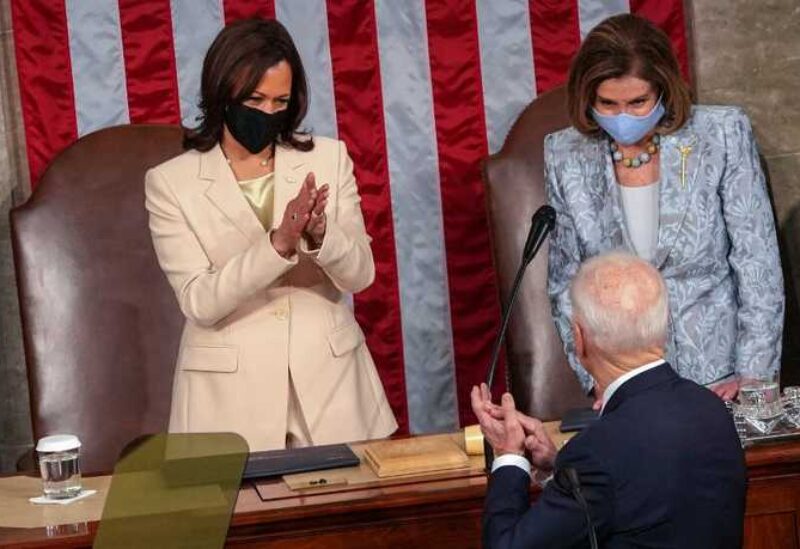 For the first time in US history, two women sat behind the Congress podium in their official capacity, during a speech by US President Joe Biden in front of the two chambers of the legislative institution marking the 100th anniversary of his inauguration.

During Biden’s speech, his Vice President, Kamala Harris, and the Speaker of the US House of Representatives, Nancy Pelosi, appeared behind him.

Biden began his speech by addressing Harris and Pelosi, saying, “Mrs. Speaker, Mrs. Vice President. Never before has a president said those words from this stage, no president has ever uttered those words.”

This is the first time that the two women have made history, especially since Harris is the first in the history of the country to hold the position of vice president, and Pelosi preceded it when she became the first female speaker of the US House of Representatives  in 2007.

In an interview with ABC, the US channel, on Wednesday, Pelosi expressed her pride in the history she is involved in making.

Various women’s organizations and bodies expressed their happiness at this occasion and the precedent set in women.

“Harris and Pelosi are presiding over a new era where a progressive feminist agenda begins to take shape,” the National Women’s Organization of America said in a tweet on Twitter.

Tonight, for the first time in our nation’s history, two women will be on the podium with the President as he delivers an address to a Joint Session of Congress. @VP and @SpeakerPelosi are presiding over a new era where a progressive, feminist agenda is starting to take shape!