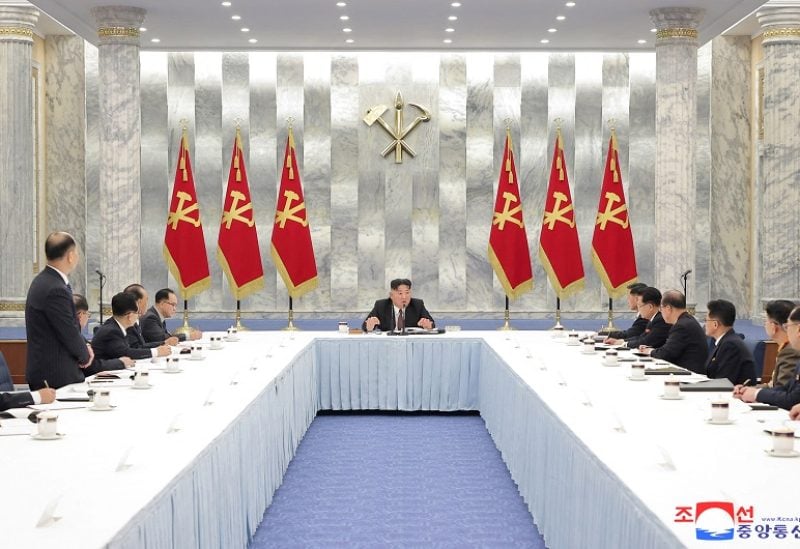 North Korean leader leader Kim Jong Un attends the 12th Meeting of the Political Bureau of the 8th Central Committee of the Workers' Party of Korea (WPK), in Pyongyang, North Korea, in this photo released on December 31, 2022 by North Korea's Korean Central News Agency (KCNA). KCNA via REUTERS ATTENTION EDITORS - THIS IMAGE WAS PROVIDED BY A THIRD PARTY. REUTERS IS UNABLE TO INDEPENDENTLY VERIFY THIS IMAGE. NO THIRD PARTY SALES. SOUTH KOREA OUT. NO COMMERCIAL OR EDITORIAL SALES IN SOUTH KOREA.

After increased tensions by allegedly flying drones into South Korean airspace, North Korea fired three short-range ballistic missiles toward its eastern waters on Saturday.
South Korea’s Joint Chiefs of Staff said in a statement it detected the three launches from an inland area south of Pyongyang, the North’s capital, on Saturday morning. It said South Korea has boosted its surveillance posture and maintains a readiness in close coordination with the United States.
Japan’s Defense Ministry said in a statement that North Korea fired suspected ballistic missiles.
It was North Korea’s first missile launch in eight days and came five days after South Korea accused Pyongyang of flying five drones into South Korea’s airspace for the first time since 2017.
South Korean warplanes and helicopters failed to bring down any of the North Korean drones spotted south of the border before they flew back home or vanished from South Korean radar. One of them traveled as far as northern Seoul. That caused security jitters among many people in the South, for which the military offered a rare public apology Tuesday.
South Korean President Yoon Suk Yeol has called for boosting his country’s air defense network and vowed to sternly deal with provocations by North Korea.
South Korea on Thursday staged large-scale military drills to simulate shooting down drones. It launched a solid-fueled rocket on Friday as part of its effort to build a space-based surveillance capability. South Korea plans to use a solid-fueled rocket to put its first spy satellite into orbit.
This year, North Korea has test-fired more than 70 ballistic and cruise missiles in what some experts say is an attempt to modernize its arsenal and increase its leverage in future dealings with the United States.
Saturday’s launch came as North Korea is under a major ruling party meeting in Pyongyang to review past policies and new policy goals for 2023. Some observers said North Korean leader Kim Jong Un would reaffirm his vow to expand his nuclear arsenal and introduce sophisticated weapons in the name of dealing with what he calls US hostility.