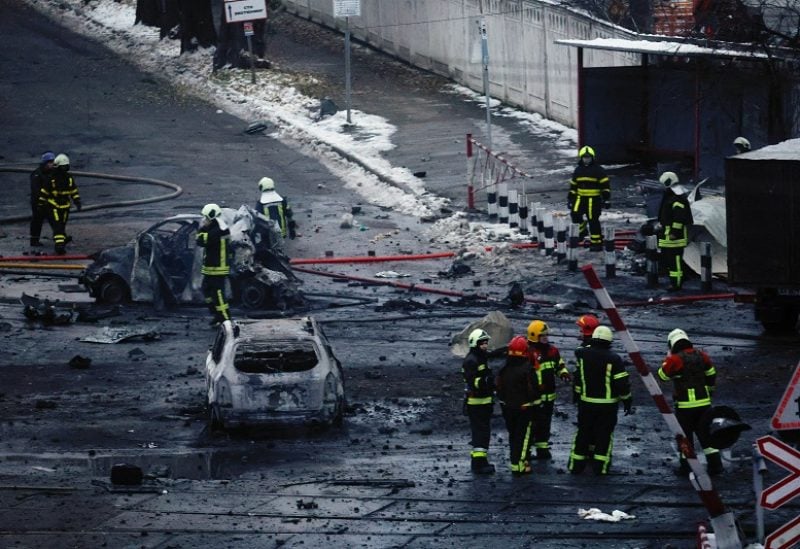 Rescuers work at a site of a Russian missile strike, amid Russia's attack on Ukraine, in Kyiv, November 23, 2022. REUTERS/Valentyn Ogirenko

Amid growing concerns that the notorious private Russian military company has been playing an increasingly bigger role in Moscow’s war in Ukraine, Washington said that North Korea shipped rockets and missiles to the Wagner Group
“We assess that the amount of material delivered to Wagner will not change battlefield dynamics in Ukraine,” White House National Security Council spokesman John Kirby said.
Kirby said US intelligence officials determined that North Korea completed an initial arms shipment last month, noting that the US was “concerned” about North Korea planning on delivering more military equipment.
British Foreign Minister James Cleverly condemned North Korea for having reportedly supplied arms to Russia, saying in a statement that the “fact that President Putin is turning to North Korea for help is a sign of Russia’s desperation and isolation.”
North Korea’s Foreign Ministry denied reports of it having supplied weapons to Russia’s Wagner group, saying they were “groundless.”
“The DPRK [Democratic People’s Republic of Korea] remains unchanged in its principled stand on the issue of ‘arms transaction’ between the DPRK and Russia which has never happened,” North Korean state news agency KCNA reported.
The KCNA report cited a Foreign Ministry spokesperson and added the spokesperson saying it was the US that was “bringing bloodshed and destruction to Ukraine by providing it with various kinds of lethal weapons.”
Officials in President Joe Biden’s administration said the arms shipment flies in the face of UN sanctions that ban Pyongyang from importing or exporting weapons.
Linda Thomas-Greenfield, the US ambassador to the United Nations, said the transfer of weapons to the shadowy Russian mercenary group was “despicable” given that Russia is a permanent member of the UN Security Council.
Russia, a Council member with veto power, was now procuring weapons from North Korea and Iran to “pursue its war of aggression against Ukraine,” she said.
Wagner has some 50,000 personnel fighting in the Ukraine, according to US assessment. The company, which is controlled by a close ally of Russian President Vladimir Putin, is spending about $100 million (€94 million) a month in the fight, Kirby said.
North Korea has increasingly ramped up weapons testing this year, with the International Atomic Energy Agency warning that indications are that the country is preparing for a nuclear test.