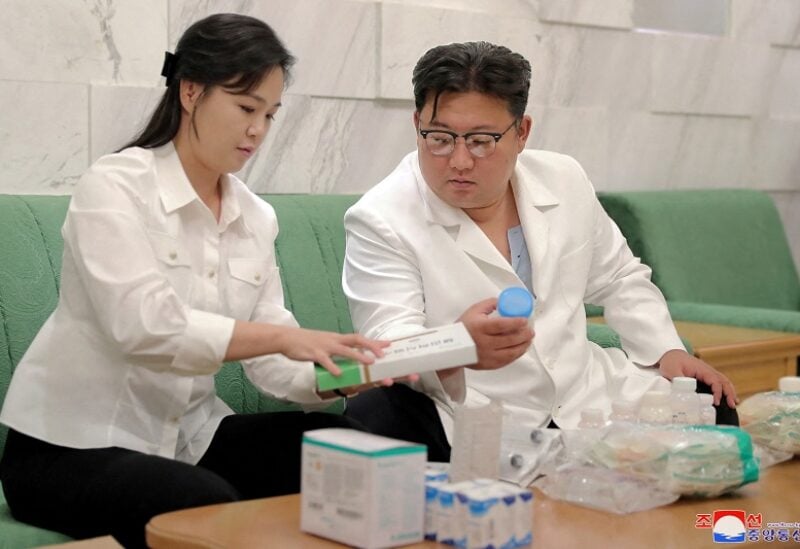 FILE PHOTO: North Korean leader Kim Jong Un sends home-prepared medicines to the Haeju City Committee of the Workers' Party of Korea (WPK) in this photo released by the country's Korean Central News Agency on June 16, 2022. KCNA via REUTERS ATTENTION EDITORS - THIS IMAGE WAS PROVIDED BY A THIRD PARTY. REUTERS IS UNABLE TO INDEPENDENTLY VERIFY THIS IMAGE. NO THIRD PARTY SALES. SOUTH KOREA OUT. NO COMMERCIAL OR EDITORIAL SALES IN SOUTH KOREA./File Photo

Calling upon officials “to fulfil their duty in the work for easing the people’s misfortune and sufferings as soon as possible,” Kim said “The officials … prepared medicines, foodstuff and daily necessities needed for the treatment of the epidemic and stable life to render aid to the people in Haeju City and Kangryong County (of South Hwanghae Province).”
Suspected to be cholera or typhoid, the outbreak is being monitored by South Korea’s Unification Ministry handling inter-Korean affairs.
Raising concerns may add to chronic food shortages amid the wave of COVID-19 infections, South Hwanghae Province, which is North Korea’s key agricultural region, said it will have an adverse impact on production.
Rather than confirmed COVID cases, North Korea has been reporting patient numbers with fever symptoms, potentially due to a lack of testing ability.
Bringing the total number in the country since late April to above 4.58 million, KCNA on Friday reported 23,160 more people with fever symptoms.

Expressing optimism that the COVID wave has shown signs of subsiding, Kim said in North Korea more than 99 per cent of fever patients have recovered.

However, its claims have been disputed by the World Health Organization which has said it believes the situation is getting worse.