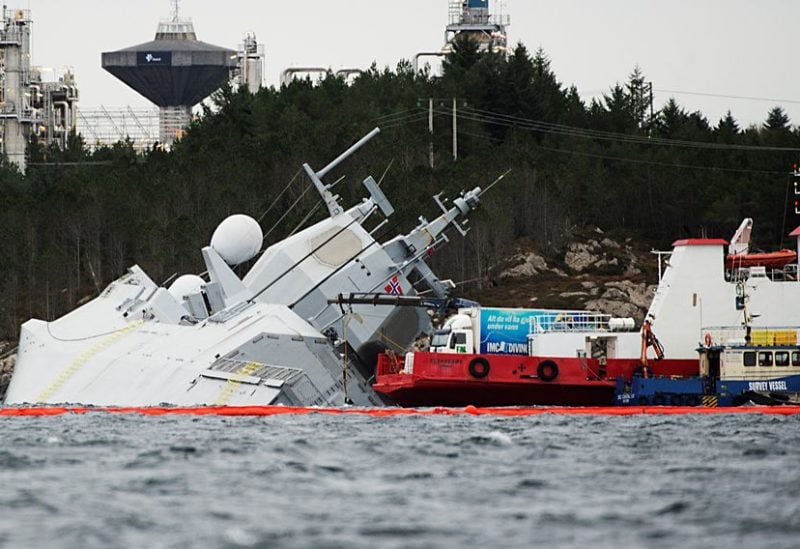 The Norwegian frigate "KNM Helge Ingstad" takes on water after a collision with the tanker "Sola TS" in Oygarden, Norway, November 10, 2018. NTB Scanpix/Marit Hommedal via REUTERS

A Norwegian naval officer on Monday denied negligence leading up to the 2018 collision between a warship he commanded and an oil tanker in which the military vessel sank.

Building a replacement for the lost Helge Ingstad frigate would cost up to 13 billion crowns ($1.3 billion), the armed forces estimated in a 2019 report.

The early-morning crash between the Ingstad and the fully loaded Sola TS crude carrier near a major North Sea oil export terminal also triggered shutdowns of parts of Norway’s petroleum production. There was no leak from the oil tanker.

Members of the 137-strong Ingstad crew had earlier described waking up in the middle of the night as water poured into their cabins and alarms went off as they tried in vain to save the ship, although they suffered only minor injuries.

The defendant was the officer in charge on the bridge of the Ingstad at the time.

The officer pleaded not guilty to negligence. He believes he was unfairly singled out for blame, his lawyer Christian Lundin said.

“He looks forward to the case starting and to giving his version of what happened,” Lundin told news agency NTB.

Recordings of communication between the two vessels showed the slow-moving Sola several times asking the faster Ingstad to alter its course or face collision, but the request was declined by the navy ship, which feared getting too close to shore.