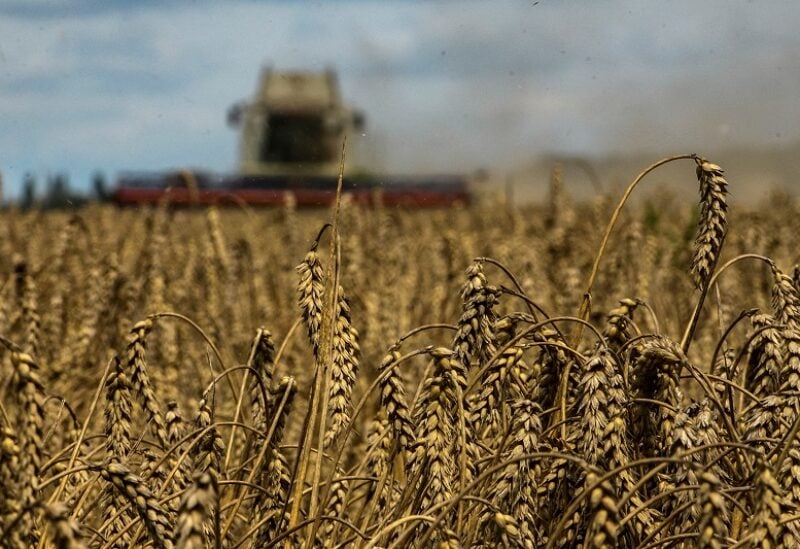 FILE PHOTO: A combine harvests wheat in a field near the village of Zghurivka, amid Russia's attack on Ukraine, in Kyiv region, Ukraine August 9, 2022. REUTERS/Viacheslav Musiienko/File Photo

After months of exports being blocked by Russian warships and Ukrainian sea mines, over two dozen ships have left the largest Ukrainian ports in the Black Sea since July 22, when Russia and Ukraine signed an agreement brokered by the United Nations and Turkey to allow grain exports from Ukraine to restart.
So far, according to an interim report by the Ukrainian Sea Ports Authority, some 600,000 tons have arrived on the global market. The authority hopes eventually for 100 ships to be leaving ports in Odesa, Pivdennyi and Chornomorsk every month. But this is not happening yet.
Apart from the UN-chartered ship that left for Ethiopia, only four vessels entered the ports of the Odesa region in accordance with new contracts. The other ships had already been waiting in port for months.

“The situation is very slow with new contracts,” Pavlo Martyshev from the Kyiv School of Economics (KSE) told DW. “The participants on the market don’t really trust the Russians and expect surprises,” he added, alluding to a Russian missile strike on the port of Odesa just one day after the grain corridor agreement was signed.

At the beginning of August, Martyshev had optimistically estimated in an analysis for the KSE that revenues of over $5 billion (€5 billion) would be generated by the additional export potential — an important sum in foreign currency for war-torn Ukraine and its farmers. But the reality currently looks different.

“Freight costs vary widely, often within a day. The market is nervous. Sometimes there are reports of Russian missile fire on the Odesa region, sometimes on the port of Mykolaiv, sometimes Russian fighter planes fly over the demilitarized sea corridor intended for the safe passage of ships,” Martyshev explained.

Risk premiums are high
Odesa resident Gennediy Ivanov, the managing director of the logistics company BPG Shipping, is familiar with transporting goods to war zones: His company organized shipments to Yemen for over 10 years. Now, he is struggling to convince shipping companies to dock in his hometown.

“There are few shipping companies that systematically work in potentially dangerous regions such as West Africa or Yemen and are also willing to serve Ukraine because they know there are risk premiums,” he told DW. “This ultimately means that shipping costs are much higher than in neighboring, ‘peaceful’ countries like Romania and Bulgaria.”

But he was confident that the longer the grain corridor functioned without incident, the more ships would enter Ukrainian ports. “When the grain agreement was signed, insurance companies expected premiums of 4 to 5% of the ships’ market value for a seven-day period. Today, they are at 1 to 1.5%, which still costs an average of $200,000 to $270,000 per week,” he said.