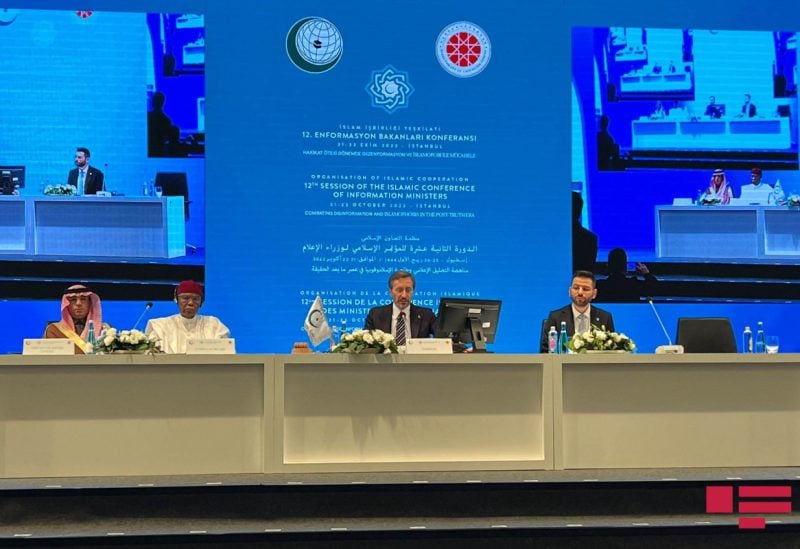 The Organization of Islamic Cooperation issued a resolution to combat disinformation and Islamophobia at a conference in Turkey, asking the media to foster informed conversation as knowledge spreads and access grows.

According to an OIC release, the Istanbul Declaration was adopted at the 12th session of the Islamic Conference of OIC Information Ministers, which began on Saturday in Istanbul.

The declaration aims to combat systemic disinformation in the digital age when the sharing of information has become more democratized due to social media platforms.

Under the declaration, OIC members reiterated their unanimous support to condemn all forms of extremism, violence, radicalization, and terrorism.

Held under the theme ‘Combating Disinformation and Islamophobia in the Post-truth Era,’ the two-day conference saw the attendance of high-level ministers and representatives from 57 countries, seeking to deepen their cooperation in the fields of media and information in the Islamic world to tackle the spread of religious disinformation.

At the beginning of the opening session on Saturday, Saudi Arabia handed over the chairmanship of the conference to Turkey.

In a speech, Saudi Arabia’s acting Minister of Media Dr. Majid bin Abduallah al-Qasabi mentioned the challenges the world is currently witnessing, calling for greater coordination between OIC member states to confront them and develop a roadmap with clear mechanisms based on trust to advance joint action.

“There is a great responsibility on the shoulders of the conference, especially because media misinformation is on the rise and [this] generates great problems in light of the difficulty of accessing the truth in the whole world,” Turkey’s Communications Director Fahrettin Altun said at the conference, echoing al-Qasabi’s sentiment.

Meanwhile, the OIC’s Secretary-General Hissein Brahim Taha said that the session aimed to discuss the challenges facing the media sector, especially in the organization’s member states, as well as reviewing the media’s discourse in relation to religious matters.

Taha highlighted that tackling the issue of disinformation was particularly crucial at this time with the rise of social media, which has made it possible for anyone to send and receive news and create media content.

In addition, the Secretary-General also noted that the continued upsurge in terrorism and extremism discourse have managed to “lure” segments of the younger population under “pseudo-Islamic slogans that have nothing to do with the Islamic religion,” according to the OIC statement.

Disinformation and Islamophobia are currently among the most serious practices to falsify facts and mislead local and international public opinion, he said, adding that they seek to distort the truth and the noble values of Islam.

Taha called on the media to relentlessly combat these phenomena, urging media outlets and institutions to use informed and persuasive discourse to combat these challenges and focus on news that highlights the economic development and cultural projects of OIC member states to inspire greater hope and optimism.