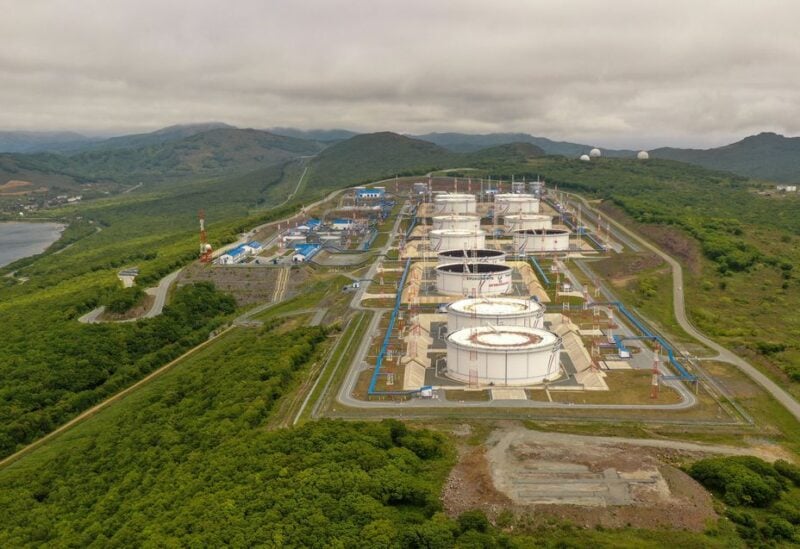 An aerial view shows oil tanks of Transneft oil pipeline operator at the crude oil terminal Kozmino on the shore of Nakhodka Bay near the port city of Nakhodka, Russia June 13, 2022. Picture taken with a drone. REUTERS/Tatiana Meel

Oil futures recovered some of their losses after falling by 2% the previous session, aided by supply concerns resulting from OPEC+ production cuts, though a stronger dollar weighed on market sentiment.

“Crude oil prices will gain further momentum after a brief retreat and can edge higher towards $104 a barrel for Brent and around $98 a barrel for WTI crude amid supply tightness caused by OPEC and allies-led output cuts and disruptions to Russian oil production,” said Sugandha Sachdeva, vice president of commodity and currency at Religare Broking.

Last week, the Organization of the Petroleum Exporting Countries and allies including Russia, together known as OPEC+, decided to cut their output target by 2 million barrels per day.

“Although OPEC+’s 2 million bpd headline oil output cut from the August quotas looks large on paper, the effective cut would be smaller,” Citi Research said in a note.

“We assume the final cut to be less than 0.9 million bpd partly amid poor compliance from Iraq,” Citi said.

Also on the supply side, Russia’s Transneft state-owned pipeline monopoly said on Wednesday it had received notice from Polish operator PERN about a leak on the Druzhba oil pipeline, Interfax reported.

Meanwhile, the U.S. dollar hit a new 24-year high against the yen on Wednesday on concerns about inflation and the pace of U.S. rate increases. A stronger dollar makes dollar-denominated commodities more expensive for holders of other currencies and tends to weigh on oil and other risk assets.

“Despite fundamentals auguring higher for oil and a rather hefty production cut OPEC backstop, any breakdown in risk assets may continue to hurt oil prices until some semblance of bottom forms in risk assets,” Stephen Innes, managing partner at SPI Asset Management said in a note.

“So, a hot CPI and even a dreary U.S. earning season could negatively impact oil markets,” Innes added.

The U.S. consumer price report is due on Thursday.

Also on the downside, the International Monetary Fund on Tuesday cut its global growth forecast for 2023 and warned of increasing risk of a global recession.

U.S. inventory data has been delayed by a day this week because of a holiday on Monday. Industry data from the American Petroleum Institute is due at 4:30 p.m. EDT (2030 GMT) on Wednesday while the U.S. Energy Information Administration, will release its data at 11 a.m. EDT (1500 GMT) on Thursday.