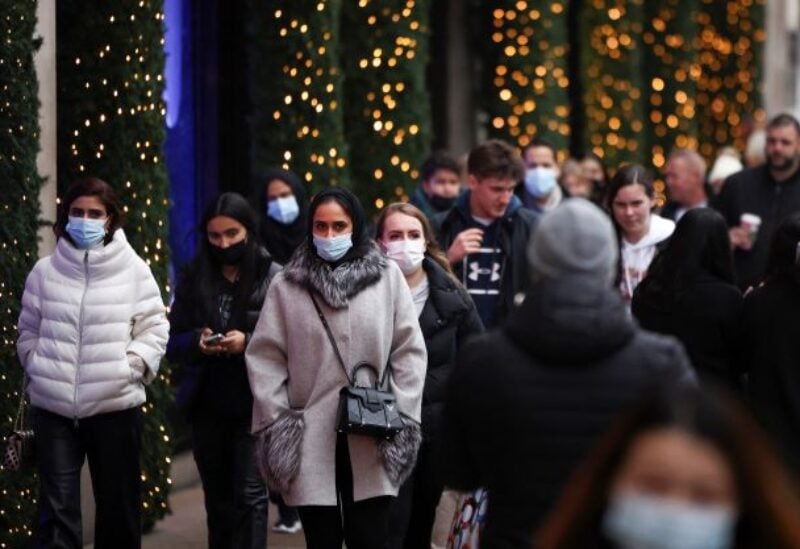 According to early projected estimates, one in every 20 Londoners had COVID-19 last week, and that number might have grown to one in every ten by the start of this week, highlighting the Omicron variant’s unrelenting progress.

On Thursday, the Office for National Statistics released revised figures showing that 1 in 20 persons in London had COVID-19 on December 16, compared to 1 in 30 on December 13.

Daily modelled predictions for the following days – which are subject to far higher uncertainty and are subject to change – showed that by Sunday, it may have increased to around one in ten.

The figures came a day after Britain recorded a record number of new coronavirus cases as the Omicron variant swept across the country, with the daily tally reaching 119,789 from 106,122 a day earlier.

The ONS estimates showed around 1 in 35 people in England – equivalent to 1.54 million people – were infected with COVID-19 during the six days to Dec. 19.

The early modelling of the subsequent days suggested that could have risen to more than 2 million people on Sunday, or around 1 in 25.

Prevalence increased across all parts of the United Kingdom the ONS said, with Scotland showing the lowest rate of infections at 1 in 65 people.

Many industries and transport networks are struggling with staff shortages as sick workers self-isolate, while hospitals in Britain have warned of the risk of an impact on patient safety.

Omicron’s rapid advance has driven a surge in cases in Britain over the last seven days, with the total rising by 678,165, government data showed on Thursday.

As the Conservative government of Prime Minister Boris Johnson struggles to limit the economic impact of the latest COVID-19 outbreak, it said on Wednesday it was reducing the legal self-isolation period in England to seven days from 10.