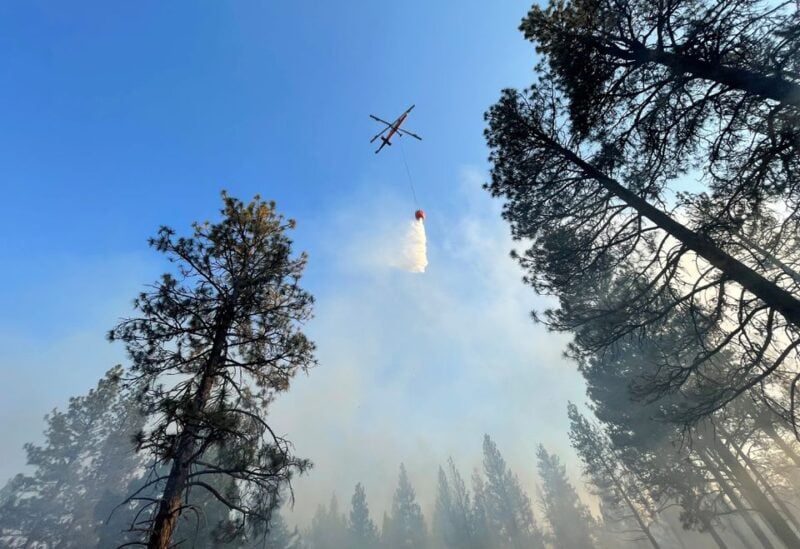 Hand crews backed by water-dropping helicopters struggled on Thursday to suppress a huge wildfire that displaced roughly 2,000 residents in southern Oregon, the largest among dozens of blazes raging across the drought-stricken western United States.

The Bootleg fire has charred more than 227,000 acres (91,860 hectares) of desiccated timber and brush in and around the Fremont-Winema National Forest since erupting on July 6 about 250 miles (400 km) south of Portland.

That total, exceeding the land mass of New York City, was 12,000 acres higher than Wednesday’s tally. Strike teams have carved containment lines around 7% of the fires’s perimeter, up from 5% a day earlier, but Incident Commander Joe Hessel said the blaze would continue to expand.

“The extremely dry vegetation and weather are not in our favor,” Hessel said on Twitter.

More than 1,700 firefighters and a dozen helicopters were assigned to the blaze, with demand for personnel and equipment across the Pacific Northwest beginning to strain available resources, said Jim Gersbach, a spokesman for the Oregon Department of Forestry.

“It’s uncommon for us to reach this level of demand on firefighting resources this early” in the season, he said.

Firefighter Garrett Souza, 42, a resident of the nearby town of Chiloquin, said Wednesday he and his team spent 39 hours straight on the “initial attack” of the fire last week.

“It’s the cumulative fatigue that really, I think, wears a person out over time,” he told Reuters, as he took a break from hacking at hotspots in the burn area.

No serious injuries have been linked to the Bootleg fire, officials said, but it has destroyed at least 21 homes and 54 other structures, and forced an estimated 2,000 people from several hundred dwellings placed under evacuation. Nearly 2,000 homes were threatened.

LARGEST OF MANY WILDFIRES

The Bootleg ranks as the largest by far of 70 major active wildfires listed on Thursday as having affected nearly 1 million acres in 11 states, the National Interagency Fire Center in Boise, Idaho, reported. It was also the sixth-largest on record in Oregon since 1900, according to state forestry figures.

Other states hard hit by the latest spate of wildfires include California, Idaho, Montana and Alaska.

As of Wednesday, the center in Boise put its “national wildland fire preparedness level” at 5, the highest of its five-tier scale, meaning most U.S. firefighting resources are currently deployed somewhere across the country.

The situation represents an unusually busy start to the annual fire season, coming amid extremely dry conditions and record-breaking heat that has baked much of the West in recent weeks.

Scientists have said the growing frequency and intensity of wildfires are largely attributable to prolonged drought that is symptomatic of climate change.

One newly ignited blaze drawing attention on Thursday was the Dixie fire, which erupted on Wednesday in Butte County, California, near the mountain town of Paradise, still rebuilding from a 2018 firestorm that killed 85 people and destroyed nearly 19,000 structures in the state’s deadliest wildfire disaster.

The Dixie fire has charred about 2,250 acres (910 hectares) in its first 24 hours as some 500 personnel battled the blaze, which was spreading across a steep, rocky tree-filled terrain about 85 miles (140 km) north of Sacramento.

Erik Wegner of the U.S. Forest Service said dense stands of dead and dying trees created highly combustible conditions for the blaze. “It took off really fast,” he told Reuters.

Authorities have issued evacuation orders and warnings for several small communities in the area.

In Washington state, firefighters have contained about 20% of a lightning-caused fire near Nespelem, which has burned nearly 23,000 acres (9,270 hectares) northeast of Seattle since Monday, mostly on tribal lands of the Colville Reservation.

There were no injuries, but the blaze killed some livestock, destroyed three houses and forced evacuations of several others, officials said.