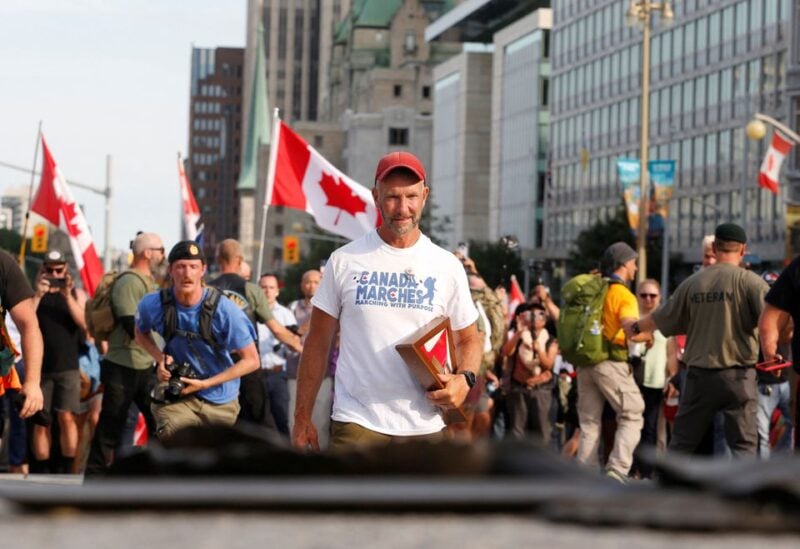 James Topp, a Canadian Forces veteran who marched across Canada protesting against the coronavirus disease (COVID-19) vaccines mandates, arrives at the Tomb of the Unknown Soldier and the National War Memorial ahead of Canada Day in Ottawa, Ontario, Canada, June 30, 2022. REUTERS/Patrick Doyle

In order to stop anti-government “freedom” demonstrators from interfering with the festivities, there will be a significant police presence and street closures around downtown Ottawa on Friday for the first Canada Day celebrations in three years.

The free concerts and other events typically conducted on the national holiday commemorating the country’s founding were last staged in 2019 due to the COVID-19 pandemic.

“This is a time to celebrate who we are and coming out of a two-year pandemic,” Public Safety Minister Marco Mendicino said on Wednesday, encouraging people to take part in the festivities.

“There may be some effort among a small minority to try and cause disturbances or worse,” he said.

Several groups are planning marches and even a dance party to protest coronavirus vaccination mandates, globalization and what they say is government overreach in Canada.

Some of the same organizers were behind a truck convoy that blocked Ottawa’s downtown core around parliament for three weeks this past winter, causing a crisis that resulted in dozens of arrests. Separate protests during the same period snarled international travel and trade at border crossings.

Earlier this week, Ottawa’s interim Police Chief Steve Bell said he expected hundreds of thousands of people to participate in the city’s celebrations, but he did not know how many people planned on joining the protests.

James Topp, a former soldier and one of the organizers, has said that the protests will be peaceful.

To keep vehicles from blocking the streets, most of the downtown core will be closed to traffic, and officials are encouraging people to take free public transit instead of driving. The celebrations will start in the morning and end with concerts and fireworks in the evening.

Multiple police forces, including the Royal Canadian Mounted Police (RCMP), are being brought in to help. The city recently raised fines to C$1,000 ($850) for certain violations including “unusual noise” – like the blaring of vehicle horns – and blocking a highway.