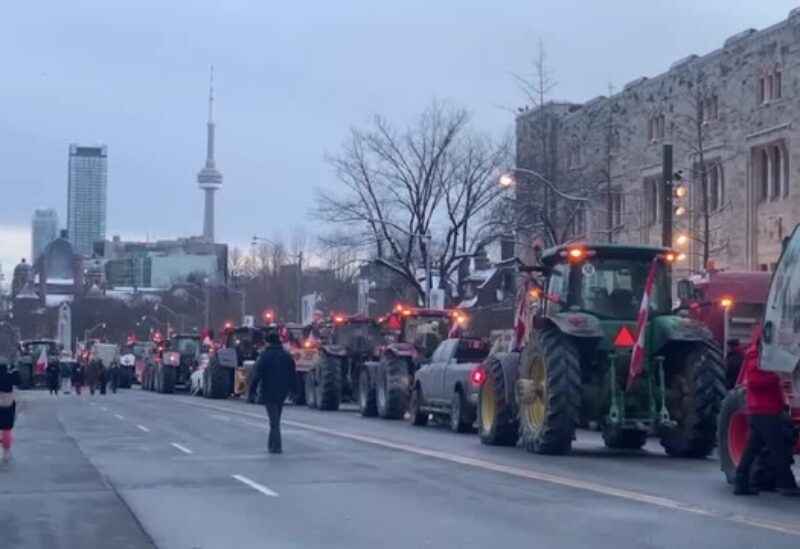 On Friday, Ottawa police pledged to crack down on a “increasingly hazardous” protest by hundreds of truckers who have shut down the Canadian capital for eight days to demand an end to COVID-19 vaccination regulations.

The well-organized roadblock, which authorities believe was aided in part by sympathizers in the United States, is unusual by Canadian standards. Hundreds more truckers were expected to enter the city this weekend, according to Ottawa Police Chief Peter Sloly.

“This is still an increasingly tense and hazardous demonstration,” he told reporters.

He said that protesters in the downtown area “remain highly organized, well-funded, and absolutely devoted to rejecting any attempts to terminate the demonstration safely.”

Some want the federal COVID-19 vaccination requirement for cross-border truckers to be repealed, while others want Liberal Prime Minister Justin Trudeau removed on the grounds that he overstepped his jurisdiction by imposing limits to combat the epidemic.

On Friday, GoFundMe removed the Freedom Convoy’s fundraising website, citing a breach of its rules of service.

“We now have evidence from law enforcement that the previously peaceful demonstration has become an occupation, with police reports of violence and other unlawful activity,” the website said in a statement.

It said donors had until Feb. 19 to request a full refund, then it will “work with organizers to send all remaining funds to credible and established charities verified by GoFundMe.”

In the western province of Alberta, where truckers have been blocking a major border crossing with the United States in a similar protest, premier Jason Kenney said ministers would meet early next week to start lifting restrictions.

“We can, and must, get on with our lives, restore our freedoms, and live with joy, not fear,” he wrote on Twitter.

Sloly, who said he and other top officials had received death threats, likened the protest to the Jan. 6, 2021, riot in Washington when thousands of supporters of former president Donald Trump stormed the U.S. Capitol in a bid to overturn Joe Biden’s election victory.

To the increasing fury of residents, Ottawa police have so far largely stood by and watched as some protesters smashed windows, threatened reporters and health care workers and abused racial minorities.

Sloly said police would put in place a “surge and contain” strategy, including reinforcements of 150 officers deployed downtown, to restore order.

“The hatred, the violence, the illegal acts that Ottawa residences and businesses have endured over the last week are unacceptable,” he said.

Blockades are also planned in Quebec City and Toronto, where authorities closed off access to the city centers.

“We all want to do everything we can to avoid the situation we are seeing in Ottawa,” said Toronto mayor John Tory.

The protest is dividing the official opposition Conservative Party, which this week ousted its leader amid complaints he had not sufficiently backed the truckers.

Interim Conservative chief Candice Bergen, in an email leaked to the Globe and Mail, said on Monday “we need to turn this into the PM’s problem” and saw no need to ask the truckers to leave.

Bergen issued a statement on Friday asking Trudeau to provide a clear plan to end the blockade and urging the truck drivers to remain peaceful.

The party’s public safety spokesman, Pierre Paul-Hus, tweeted on Friday that the blockade needed to end. Fellow legislator Dean Allison then tweeted that Paul-Hus was wrong.