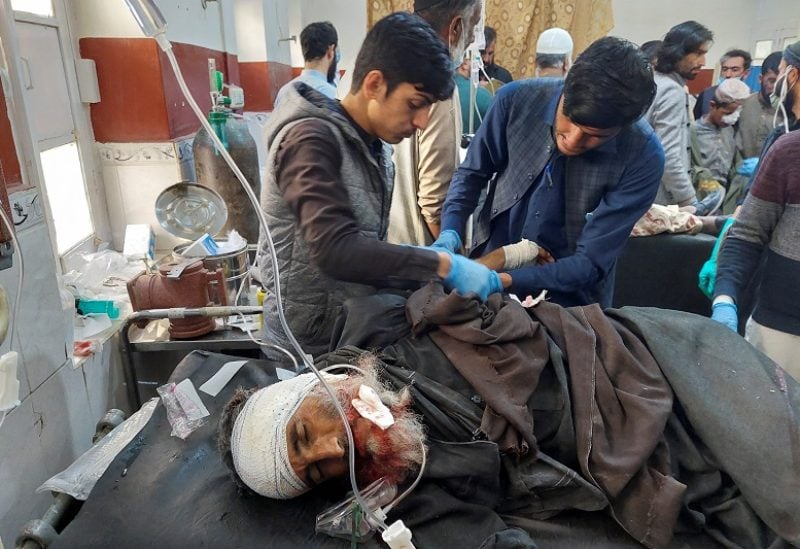 SENSITIVE MATERIAL. THIS IMAGE MAY OFFEND OR DISTURB A man injured during cross-border shelling and gunfire, receives first aid at a hospital in the Pakistan-Afghanistan border town of Chaman, Pakistan December 15, 2022. REUTERS/Abdul Khaliq Achakzai

One person was killed and 11 were wounded when Afghan Taliban forces fired mortars toward civilians near the southwestern Chaman border crossing, said the Pakistani authorities on Thursday.
The latest violence follows a series of deadly incidents and attacks that have strained relations between Pakistan and Afghanistan’s Taliban rulers in recent months. It was not immediately clear what preceded the shots near Chaman, a key trade route between the two sides.
Thursday’s ongoing violence came days after seven Pakistani civilians were killed in the across-border shelling by the Taliban forces. No military spokesman was immediately available for comment and there was also no comment from the Afghan Taliban.
Akhtar Mohammad, a doctor at a hospital in Chaman, said staff there received 12 wounded people following the clashes. One of them later died and some of the injured were listed in critical condition.
Abdul Hameed Zehri, a government administrator in the town of Chaman in Baluchistan province, also confirmed the casualties. Security officials say Pakistan’s army responded to the Afghan fire, but did not give further details.
Authorities say mortars fired by the Afghan Taliban forces also hit a truck near Chaman. They say accused the Afghan Taliban forces of intentionally targeting the civilian population.
Afghanistan’s Taliban seized the Afghan capital of Kabul last year. Since then, the countries have traded fire mainly over lingering disputes about Pakistan’s construction of a fence along the Afghan border. Incidents of militant attacks on Pakistani security forces have also increased since the country’s new army chief Gen. Asim Munir took the charge on Nov. 29 and replaced Qamar Javed Bajwa.
On Thursday, US CENTCOM chief Gen. Erik Kurilla visited Pakistan and met with Munir in the garrison city of Rawalpindi, according to a military statement. The two military leaders discussed a range of issues, including the regional stability and security cooperation. The statement said Kurilla also visited the northwestern border town of Torkham near Afghanistan.
Earlier this month, Pakistan’s Embassy in Kabul came under gunfire in an attack that was later claimed by the Daesh group. Pakistani officials at the time had called the incident an attack on its envoy there. Islamabad also has said Afghanistan’s rulers are sheltering militants who carry out deadly attacks on its soil.