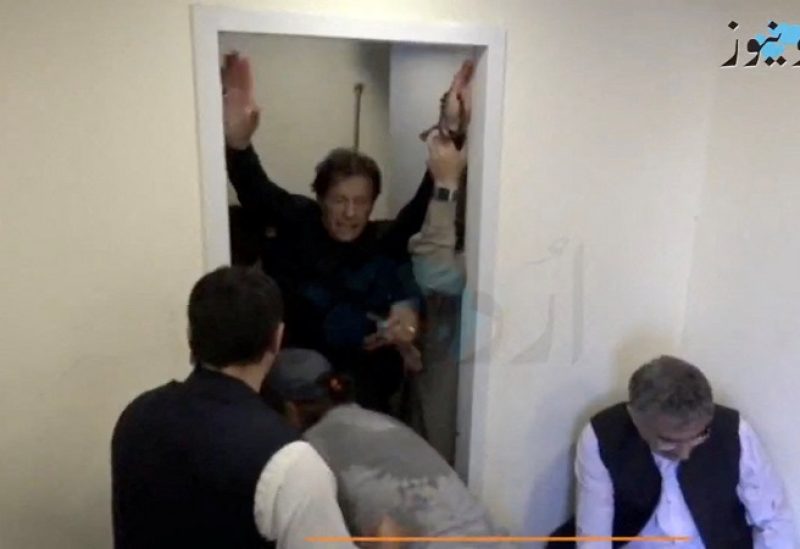 Former Pakistani Prime Minister Imran Khan is helped after he was shot in the shin in Wazirabad, Pakistan November 3, 2022 in this still image obtained from video. Urdu Media via REUTERS THIS IMAGE HAS BEEN SUPPLIED BY A THIRD PARTY. MANDATORY CREDIT. NO RESALES. NO ARCHIVES. PAKISTAN OUT. NO COMMERCIAL OR EDITORIAL SALES IN PAKISTAN

Former Pakistani Prime Minister Imran Khan aids said on Thursday, that he was shot in the leg during his political march to the capital, in a bid to pressure the government to announce snap polls.

The march organized by Khan’s Pakistan Tehreek-e-Insaf party began from the city of Lahore last Friday and has made stops in different towns daily on the way to the capital, Islamabad, which the convoy plans to reach by Nov. 11. Khan’s followers are piled onto trucks and cars in the convoy, but many are also marching alongside on foot.

On Thursday, the ex-PM’s caravan was meant to stop in Wazirabad city in Punjab’s Gujranwala district. Wazirabad is nearly 200 km from Islamabad.
Close Khan aide and former Gov. Imran Ismail told Geo News that Khan had been shot three times in his left leg.

He paid tribute to his leader’s bravery, saying that during the chaos that followed the shooting, the PTI leader calmed down his supporters and told them “not to panic.”

He said Khan was “bleeding excessively,” and a bandage was tied to the former PM’s leg.

Javed, Ismail said, was shot in the face and hand.

TV footage showed Khan, a bandage on his leg, being piled into a bulletproof car, with media reporting that he was being rushed to the hospital. The sirens of multiple ambulances could be heard.

The caravan was just feet away from the reception camp in Wazirabad when the shooting began.
In a Twitter post, PM Shehbaz Sharif condemned the firing “in the strongest words” and prayed for Khan’s recovery.

“Prime Minister has asked for an immediate report on the incident…(issued) directive to Home Minister Rana Sanaullah to seek immediate report from Inspector General Police and Chief Secretary,” the PM House said in a statement released to the media.

PTI leader and former Human Rights Minister Shireen Mazari accused Sanaullah of threatening Khan, saying he should be arrested for attempted murder.
“The string pullers, the Establishment will also be held responsible by the nation for this murderous attack on Imran Khan,” she said on Twitter, referring to the powerful military.

Khan, once widely believed to have been supported by Pakistan’s powerful military establishment, is now considered to have fallen out with the army since his ouster through a parliamentary vote of no-confidence in April.

The former premier as well as members and supporters of his PTI party have been criticizing the Pakistani military, which has ruled the South Asian country for almost half of its 75-year history, and the army chief for not intervening to block his ouster, which he says was part of a US-backed “foreign conspiracy.”

Washington, Khan’s political rivals who are now in power and the military deny the allegations.

Geo News and other major news media reported that Khan and his close aide Sen. Faisal Javed had been injured by a shooter who was on the ground while the politicians were atop a container.

“Imran Khan is safe,” Javed said in comments to the media outside a hospital, wearing a white shalwar kameez covered in blood, a bandage on his face.

“Our (PTI) spirits are high and god willing this movement will not stop.”