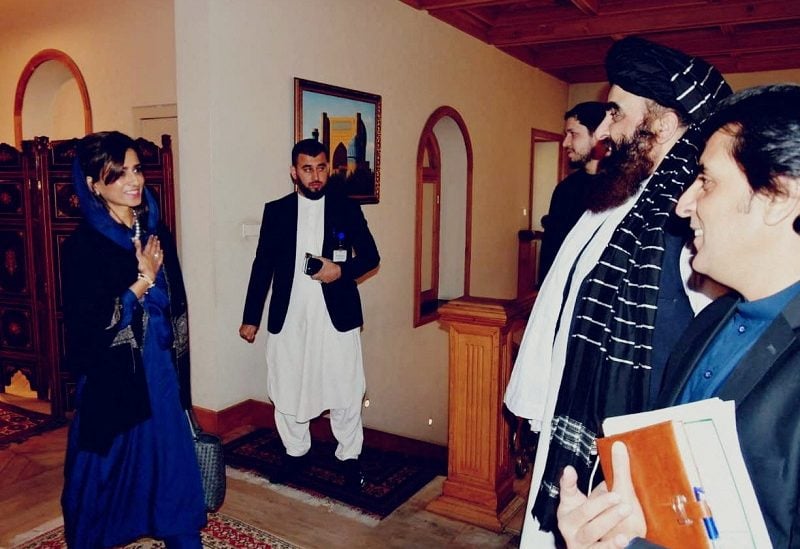 Pakistan's Minister of State Hina Rabbani Khar, welcomed by the acting Afghan foreign Minister Amir Khan Muttaqi, upon her arrival in Kabul, Afghanistan November 29, 2022. Ministry of Foreign Affairs (MoFA)/Handout via REUTERS ATTENTION EDITORS - THIS PICTURE WAS PROVIDED BY A THIRD PARTY. NO RESALES. NO ARCHIVE.

While no one has yet claimed responsibility, Pakistan’s head of mission to Afghanistan, Ubaid-ur-Rehman Nizamani, escaped what Prime Minister Shahbaz Sharif called “an assassination attempt” on Friday, when a lone gunman began firing “at the compound of the Embassy of Pakistan in Kabul.”
“I strongly condemn dastardly assassination attempt on Pakistan Head of Mission, Kabul,” Sharif tweeted Friday, adding, “I demand immediate investigation & action against perpetrators of this heinous act.”
The Pakistan Foreign Ministry on Friday released a statement announcing that an embassy guard had been, “critically injured in the attack while protecting the Head of Mission.”
The Foreign Ministry on Friday summoned the Afghan charges d’affaires to convey “deep concerns and anguish over the attack.”
The Afghan representative said: “the attack was perpetrated by the common enemies of Pakistan and Afghanistan. The attack has been condemned by Afghan leadership in the strongest possible terms at the highest level.
The diplomat further said Afghan authorities would, “leave no stone unturned in bringing the perpetrators of this dastardly act to justice.”
Nizamani arrived in Kabul just last month, with Pakistan being one of the few countries to keep their embassy in operation after the Taliban took over the country in August 2021. Nevertheless, Islamabad does not officially recognize the Taliban government in Kabul.
Afghan Foreign Ministry Spokesman Abdul Qahar Balkhi strongly condemned the attack, tweeting, “The Islamic Emirate of Afghanistan will not allow any malicious actors to pose a threat to the security of diplomatic missions in Kabul.”
“Our security will conduct a serious investigation, identify perpetrators and bring them to justice,” Balkhi said.
Tensions between Pakistan and Afghanistan are high and the attack comes just one day after Islamabad demanded the Taliban in Kabul do more to prevent terrorists from attacking them at home — after a suicide bombing carried out by the Pakistani Taliban killed four people earlier this week.
Islamabad says the Taliban, which vowed to stamp out terror, is not doing enough to crack down on militants operating in border regions.
Warlord politician Hekmatyar targeted in suicide bomb attack
In a separate attack in the capital, the offices of the Hezb-e-Islami party of warlord and former Prime Minister Gulbuddin Hekmatyar were targeted by suicide bombers on Friday as well.
According to Taliban and party sources, a vehicle packed with explosives was detonated near Hezb-e-Islami’s offices and gunmen attacked a nearby mosque at which senior party officials were present.
“I assure my countrymen, a failed attempt happened here by those who have done it many times but have failed,” said Hekmatyar in a video statement. He added hat the perpetrators had been wearing explosive suicide vests and that one was dressed in a woman’s burqa but did not elaborate on who he suspected of being behind the attempt on his life.
Several perpetrators were killed during the attack and several guards injured, according to a Taliban source.
Hekmatyar founded Hezb-e-Islami, a mujahideen fighting group that attacked Soviet invaders in Afghanistan from bases in neighboring Pakistan, back in the mid-1970s. He played a key role in the civil war that erupted after the Soviet Union was ousted.
During that time and until the Taliban finally seized power in the late 1990s, Hekmatyar often battled the so-called Northern Alliance that would later ally with the US. He also battled US troops when they invaded Afghanistan after the World Trade Center attacks of 2001.
Hekmatyar, who served as Afghan prime minister twice in the 1990s was one of the few high-profile leaders in the country not to flee when the Taliban again came to power last year.