Palestinian hunger striker held by Israel could die at any moment, lawyer says 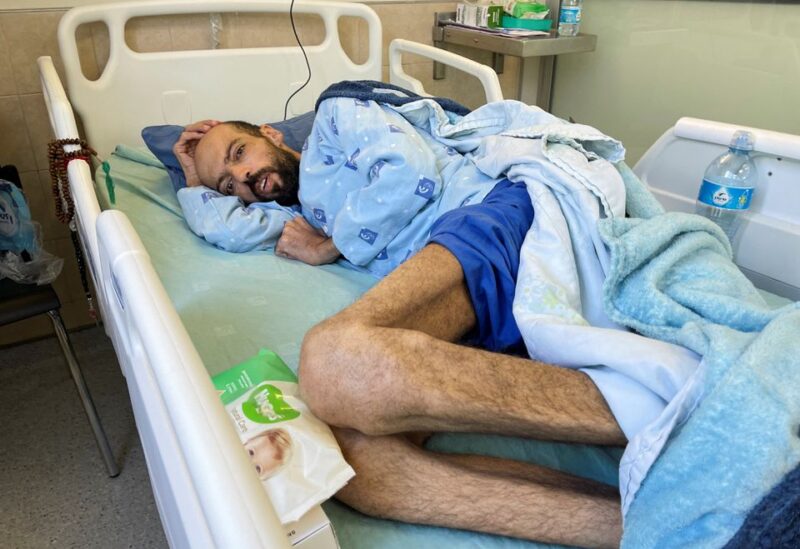 Palestinian administrative prisoner Khalil Awawdeh, who has been on a hunger strike for more than 160 days, is seen at Assaf Harofeh hospital in Be'er Ya'akov, Israel August 24, 2022. REUTERS/Sinan Abu Mayzer NO RESALES. NO ARCHIVES

A Palestinian prisoner who has been on hunger strike for more than 160 days in protest of his confinement by Israel, according to his lawyer, could die at any time.

Khalil Awawdeh, 40, was detained by Israeli soldiers in December 2021 and has been kept without accusation or trial since, a tactic known as administrative detention.

Israel has provided few details about the accusations facing Awawdeh. An Israeli military spokesperson said on Wednesday his detention had been confirmed several times by military courts “and it was determined that the confidential material in his case indicates that his release will threaten the security of the area.”

In March, Awawdeh launched a hunger strike demanding his freedom. He has subsisted only on water since, said his lawyer, Ahlam Haddad.

Egyptian mediators recently pushed for Awawdeh’s release under a ceasefire agreement to end three days of fighting in Gaza between Israel and the militant Islamic Jihad group.

With Israeli forces conducting near-daily operations against suspected militants in the West Bank, Awawdeh’s death could further inflame a crisis that has escalated for months.

“I feel that my body is consuming itself internally,” Awawdeh told Reuters from his hospital bed, his eyes widening and his voice fluctuating as he spoke. “God’s support, steadfastness and patience are what enable me to continue.”

Awawdeh was recently transferred from Ramle Prison to the Asaf Harofeh hospital in Israel due to his failing health.

Last Friday, the Israeli military temporarily suspended the administrative detention order against Awawdeh because his condition was deteriorating. However, he is not allowed to leave the hospital, a military spokesperson said.

Awawdeh has managed to survive this long without food likely because of a two-week break a couple of months ago, during which he received vitamin supplements, said Naji Abbas, the case manager for prisoners at Physicians for Human Rights – Israel.

At the time, Awawdeh, who now weighs 40 kilograms after having lost about 45 kilograms, agreed to end his hunger strike, thinking he was about to be released, said Abbas.

Awawdeh’s family, which lives near the occupied West Bank city of Hebron, has so far been refused permission to visit him by Israel but have supported his decision to continue his hunger strike.

“He was detained with no charge or trial,” his wife, Dalal Awawdeh, said. “Just as he was detained forcefully and taken from us, he will demand his freedom whether the occupation approves or not.”