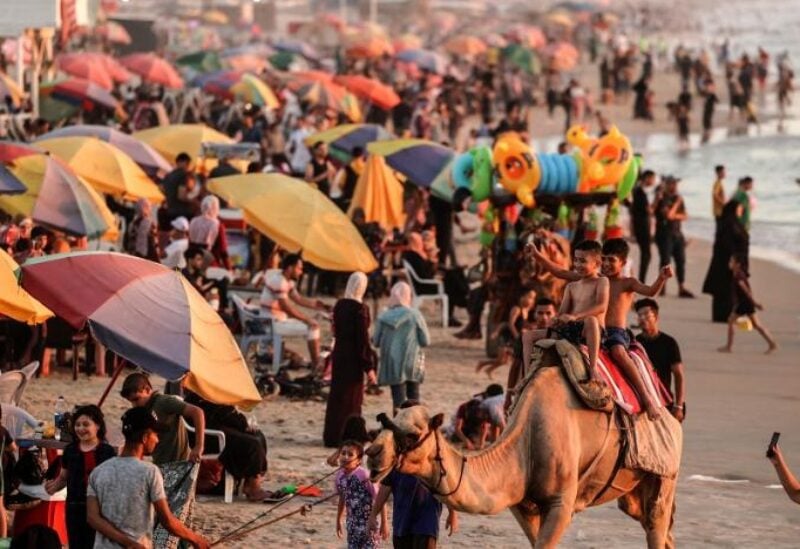 Palestinian children ride a camel at the beach during the hot summer weather along the coast of Gaza City, on July 22, 2022.

Authorities in Gaza have ordered giant concrete blocks to be dropped along the shoreline as increasingly heavy seas eat into beaches that provide residents of the densely populated strip with a rare public space for relaxation.

The blocks, placed on beaches and offshore, are aimed at countering waves that have grown in force, eating away the foundations of some seaside cafes and buildings.

But officials, residents of beach areas and experts fear the concrete barricades may not stand another stormy winter and that high waves could cause the collapse of the coastal road and threaten homes.

Nasser Thabit, an official in the territory’s Hamas-run Ministry of Public Works and Housing, said waves that reached up to 6 meters last year as the effects of climate change have become more pronounced had begun to nibble at the edges of the road.

“There are several fragile areas in Gaza Strip that would be impacted directly from a rising sea. There is a fear that should the waves get higher it may cause a catastrophe, and drown many of those residential areas,” he said.

Thabit said proper long-lasting intervention – vertical wave breakers and retaining walls along all or at least the most at risk parts of the coast – could cost around $150 million and called for help from international donors.

Measuring 375 square km (145 square miles), Gaza is one of the most densely populated areas in the world, with a population of 2.3 million Palestinians, most of them live in refugee camps, some facing the ocean.

In the Beach refugee camp in Gaza City, home to 90,000 people, residents have watched over recent years as rising seas have eroded the beach completely. Broken fridges, large tires and bricks have all been thrown along the shore to hold back the sea to no effect.

“The refugee camp has no beach, there is no place for people to sit, therefore, people are forced to pay to go north or (south),” said Abdel-Karim Zaqout, a history teacher, whose house in the camp borders the ocean.

With Gaza’s land borders tightly controlled by neighboring Israel and Egypt, the seaside is a precious resource for people looking to escape their day-to-day stresses.

In Central Gaza Strip, Radwan al-Shantaf, from Al-Zahra city municipality, said the authorities had used large quantities of the rubble of houses destroyed in the May 2021 Israeli bombardment to barricade beaches.

He said high waves had forced the owners of a bank to evacuate to a building deeper into the city, and the operators of a power plant to build a concrete wall to reinforce the outer fence.

“The advance of the sea decreased the beach area and finished off recreation, cafes and beachgoers spaces,” Shantaf told Reuters, standing in front of the concrete reinforcement.