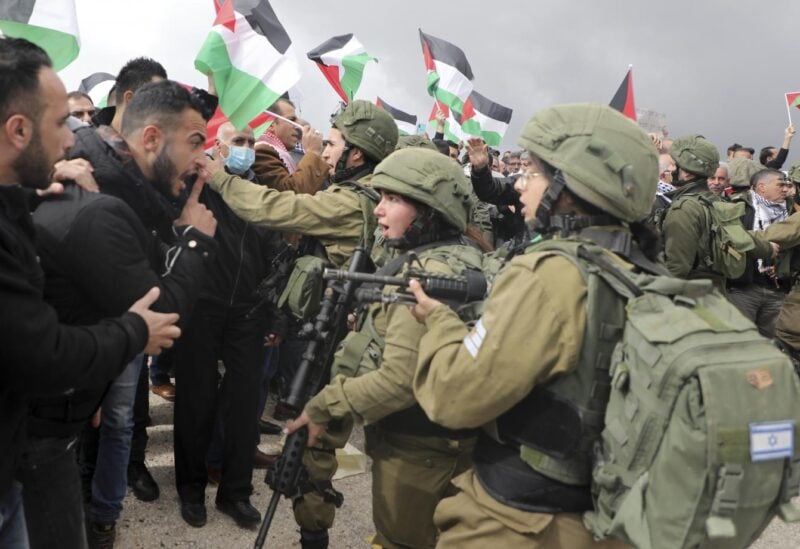 Israeli troops have attacked Palestinians taking part in protests in the occupied West Bank against Israeli settlement expansion and in support of fellow countrymen in Jerusalem al-Quds, leaving one killed and dozens of others injured.The Palestinians Health Ministry said that a young man was shot dead on Friday by Israeli forces as they attacked an anti-settlement rally on Mount Sobeih in Beita town, south of the occupied West Bank city of Nablus, using live ammunition, rubber bullets, sound bombs and tear gas.The victim was identified as Zakaria Hamayel, 28.According to the ministry, dozens of Palestinians were also shot with live ammunition, while scores of others suffered breathing difficulties due to inhaling tear gas.The protest came amid an Israeli plan to construct a settlement outpost on the top of the mountain.Israeli forces also attacked a weekly anti-settlement protest in the village of Kafr Qaddum, where dozens of other Palestinians suffered tear gas inhalation.The protest was also held in support of Palestinians threatened with dispossession in Sheikh Jarrah neighborhood and other areas in Jerusalem al-Quds.Weeks of Israeli harassment of Palestinians in Jerusalem al-Quds and attempts to appropriate Palestinian lands in the Sheikh Jarrah neighborhood of the city was followed by the 11-day Israeli aggression on Gaza, which began on May 10 and killed over 300 Palestinians.Also on Friday, Israeli settlers used live ammunition against Palestinians trying to defend their land and prevent the construction of a settlement outpost in Khirbet Shehadeh, west of the city of Salfit.More than 600,000 Israelis live in over 230 settlements built since the 1967 Israeli occupation of the West Bank and East Jerusalem al-Quds.All Israeli settlements are illegal under international law as they are built on occupied land. The United Nations Security Council has condemned Israel’s settlement activities in the occupied territories in several resolutions.

The International Organizations’ reports supporting the claim of Israeli racial discrimination against Palestinians, were welcomed by the latter.

UN special rapporteur on human rights in the Occupied Territories Michael Lynk concluded that the situation amounted to apartheid.

Lynk’s report, which was submitted to the UN Human Rights Council and published by Amnesty International on its website, examined the current human rights situation with a particular focus on the question of apartheid.

It found that Israeli Jews and Palestinians in the Occupied Territories lived “under a single regime which differentiates its distribution of rights and benefits on the basis of national and ethnic identity, and which ensures the supremacy of one group over, and to the detriment of, the other.”

It set out how this system endowed “one racial-national-ethnic group with substantial rights, benefits, and privileges, while intentionally subjecting another group to live behind walls, checkpoints and under a permanent military rule,” and concluded that this satisfied the “prevailing evidentiary standard for the existence of apartheid.”

Mustafa Barghouti, secretary-general of the Palestinian National Initiative, told Arab News: “Finally, this UN report confirms what we warned 22 years ago about the emergence of a racist apartheid regime, as it has been proven today that Israel practices oppression and persecution against the Palestinian people.

“The core issue is not revealing the incident, but what is being done about this matter. The world fails to impose sanctions on Israel for what it is doing against the Palestinian people.”

Barghouthi believed the report would form a solid basis for Palestinians to demand sanctions and a boycott of Israel and give the Palestinians hope to develop their struggle against apartheid, as happened in South Africa.

Senior Israeli peace activist Gershon Baskin told Arab News: “We need to find a new word to describe the systemic discrimination against Palestinians in the state of Israel and the occupied territories because, by using the word ‘apartheid,’ the essence of the issue is lost when we differentiate between Israel and the apartheid regime of South Africa.

“The point is that many laws give Israeli Jews superiority over Palestinian citizens in the state of Israel, including the nation-state law and the citizenship law. In the Occupied Territories, there are two completely different legal systems for Jewish Israelis and Palestinians under which Jewish Israelis enjoy full human and civil rights while Israel severely limits Palestinian rights.

While the report upset Israeli hawks, Hamas welcomed it.

“We in Hamas value Lynk’s call to the international community to take immediate action to help end the (Israeli) occupation’s crimes and protect the rights of our Palestinian people,” Jihad Taha, a spokesman for Hamas, said in a statement.

“Hamas stresses the importance of the report and considers it a new and essential addition to the series of positions and reports issued by international and human rights organizations; the latest of which is the Amnesty report, which documented the crimes and violations against our Palestinian people.”

Hamas renewed its call to the UN and the international community to take deterrent measures against the occupying power, activate the procedures to prosecute its leaders, work to end the occupation and give the Palestinian people their rights.