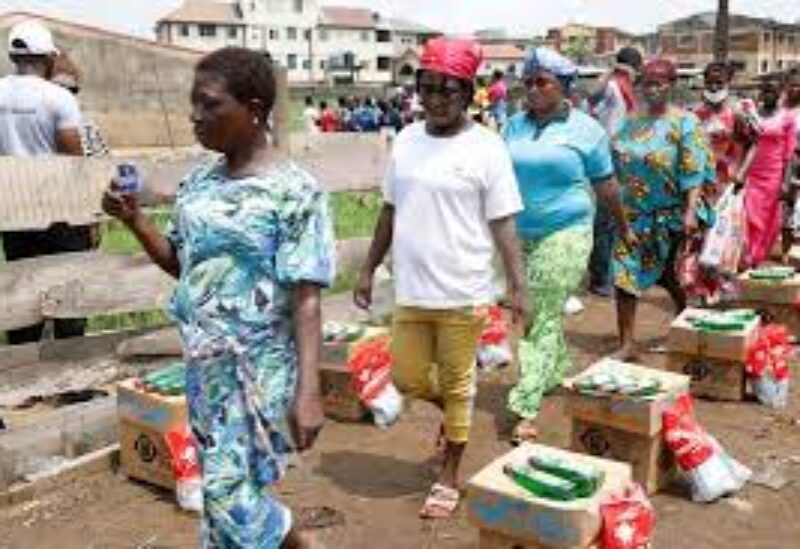 Shehu Ismaila Gbadebo has worked as a barber for two decades. The money he made at his rented stall in a bustling suburb of Nigeria’s megacity, Lagos, used to be plenty for him to pay bills and set aside some savings. Now, he relies on donated food and sometimes skips meals to feed his family.

Since COVID-19 hit Africa’s most populous nation and biggest economy, prices for some staples such as eggs, onions and palm oil, have risen by 30% or more. Fewer people can afford a haircut, and those who can are demanding discounts off Gbadebo’s 500 naira ($1.22) rate.

“The money I have is not enough for what we need,” Gbadebo, 38, told Reuters after tending a customer.

Millions of Nigerians like Gbadebo, who were once on solid financial footing, can no longer reliably feed themselves or their families. Roughly 18% of households in Nigeria have at least one adult who does not eat for an entire day at a time, compared with 6% before the pandemic, according to the World Bank. Inflation is near an all-time high, and food prices account for almost 70% of the rise.

The U.N. Food Agency has warned that food import costs worldwide are expected to surge to records this year, as price increases for nearly all agricultural commodities and a rally in energy prices boost production and shipping costs.

But in Nigeria, galloping inflation is combining with the impact of a teetering economy, rising unemployment and insecurity in farming regions to pull even the formerly middle class into dire straits.

Some experts warn of worsening malnutrition and the potential for unrest.

“What we are experiencing in Nigeria is different from what is being experienced all over the world,” said Idayat Hassan, director of the Abuja-based think-tank Centre for Democracy and Development, adding that the nation’s limited social safety net left millions with little help.

“Crime is actually skyrocketing on daily basis, because people are trying to make ends meet.”

On a cloudy Saturday afternoon, dozens of women lined up in the Oworonshoki neighbourhood on the edge of the Lagos lagoon as the Lagos Food Bank Initiative distributed packs of rice, oil and other essentials.

“Middle class families, people who would ordinarily not imagine queuing up for food, are now in that category of people that we serve,” Sunbola said.

Beans and other staples are grown mainly in Nigeria’s increasingly unstable north. Legislators warned in April the nation was “on fire” due a wave of violence and lawlessness.

In November, Islamist militants beheaded dozens of farmers in northeastern Borno state, and in the northwest, armed gangs kidnapping for ransom are driving farmers to abandon their fields.

An official in northwestern Kaduna state warned insecurity had already hit crop yields and was “precipitating a food crisis”.

Back in Lagos, Gbadebo the barber said his wife, currently at home with their three children, including a one-month-old baby, would soon start working to help support the family.

“It’s not easy,” he said. “Before COVID everything was a bit better.”