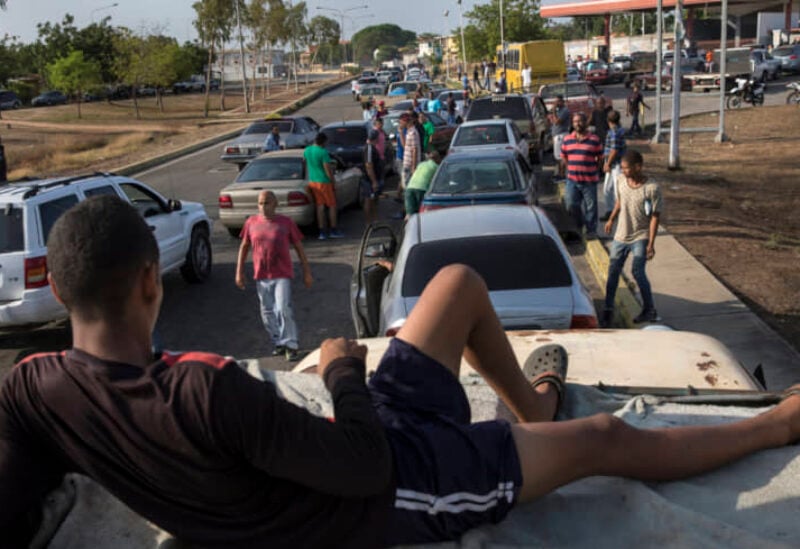 People line the street with their vehicles as they wait to fill up with gas at a fuel station, top right, in Cabimas, Venezuela, Wednesday, May 15, 2019. U.S. sanctions on oil-rich Venezuela appear to be taking hold, resulting in mile-long lines for fuel in the South American nation’s second-largest city, Maracaibo. (AP Photo/Rodrigo Abd)

Twelve-year-old Moises Bracamonte knows how to prepare fertiliser and water the black beans and corn that his family grows in Venezuela’s western Tachira state. He says the most difficult part of agricultural work is “breaking the ground” to sow the seeds without a tractor or an ox.

“Why is it difficult with a pick? Because the pick is heavy, and you have to do a lot of picking if you have a lot of seeds,” he said in an interview in the living room of his house in Cordero, a town some 800km (500 miles) southwest of Caracas.

With schools closed and no access to the internet, Moises and his 11-year-old brother Jesus help their father, also named Moises, 58, grow the food that provides for their family, something they almost never did before the coronavirus pandemic.

Coronavirus quarantine measures have boosted the number of children in the workforce in Venezuela, according to child protection activists in the South American nation, which faces a deep economic crisis that has worsened in the last five years.

The child labour problem has been fuelled by a mass migration of more than five million Venezuelans that turned many children into breadwinners for their families, according to researchers.

“[The pandemic] has aggravated the risk factors for child labour,” said Carlos Trapani, coordinator of Cecodap, a non-profit group focused on violence prevention and children’s rights. The work ranges from toiling in garbage dumps to agricultural fields, he said, adding that children in rural areas are more likely to be dependent on public assistance and are at greater risk of being recruited by gangs.

As of 2020, at least 830,000 Venezuelan children and adolescents were living without one or both parents due to migration, according to a Cecodap report published in December.

“Sometimes there are no adults because they have left the country and teenagers end up in charge of the family group,” said Leonardo Rodriguez of Casas Don Bosco, which works with disadvantaged youth.

Venezuela does not provide statistics on child labour.

The country’s information ministry and the state child protection agency IDENNA did not reply to requests for comment.

World Vision, a global Christian humanitarian organisation, conducted a survey of 420 households in Caracas and the neighbouring state of Miranda in August 2020 to determine how the pandemic had affected the risks faced by children. Respondents were those aged 30 and over, of which 71 percent were women.

“The problems that put children at greater risk during the pandemic are associated with food shortages, increased child labour … domestic violence and neglect,” World Vision said in the study, which was released in November.