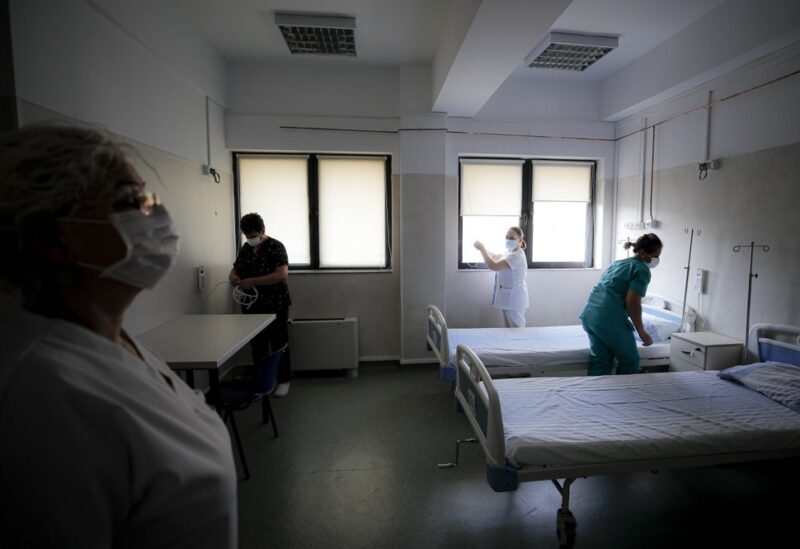 BUCHAREST, Romania: Andrei, a 32-year-old Romanian man who has been HIV positive since he was a baby, began missing his regular medical check-ups when the coronavirus pandemic hit a year ago.

“That was the first thing that led me to a general state of frustration and fear,” said Andrei. “After that, I got used to the idea of taking the antiretroviral treatment blindly without knowing if the parameters are OK or if the therapy works.”

A year ago this week, Romania reported its first case of COVID-19, prompting the country’s strapped medical system to turn its focus to treating COVID-19 patients. As a result, many patients with other conditions — including cancer — have either been denied critical care or have stopped going to their regular appointments, fearful of becoming infected.

“Many of my close associates lost their battle against their diseases due to the loss of access to treatment, hospitals and specialists,” Andrei, who didn’t want his full name used due to the stigma surrounding his condition, told The Associated Press.

Romania’s government is acknowledging the problem and has announced plans to reorganize the country’s hospitals so more non-COVID-19 patients can get access to health care.

The attempts to reform the health care system come as a third virus surge looms and as a vaccine rollout is proceeding slowly across the 27-member European Union, to which Romania belongs.

“Patients who didn’t have COVID-19 didn’t seek medical care because they were afraid of becoming infected,” Dr. Andreea Moldovan, a state secretary in the Health Ministry, told the AP.

Previously, she said, there was “a lot of pressure to have as many beds available for COVID-19 patients as possible.”

Romania’s Health Ministry says its hospital reorganization scheme will aim to create separate red and green zones in hospitals so both non-COVID-19 patients and those infected with the disease can be segregated yet receive the medical care they require.

In an interview at Bucharest’s Colentina Hospital, interim hospital manager Victor Cauni said health care services in the long term must adapt to life with COVID-19 and not “discriminate” against other patients.

“Whether we like it or not, we have more patients with many other illnesses compared to COVID patients,” he said. “We need to open for them at least partially. We’re discriminating against patients with serious conditions.”

Highlighting the problem, Cauni noted that the hospital’s urological ward used to perform from 400 to 500 medical interventions a month, but has barely had 50 in the past year.

“For the last year, patients did not have access to this hospital, and they were supposed to be transferred to different hospitals — but not many managed to find the required solutions,” Cauni said.

“You cannot just function as a COVID-19 hospital,” he said. “We have many important wards here.”

The organizational changes in Romania’s hospitals come amid growing concerns about new virus variants, including the variant first found in the U.K., which scientists say is both more transmissible and more deadly.

Romania faces these challenges as the EU nation with the lowest health care spending relative to GDP — 5.2%, compared with almost 10% on average in the bloc.

Romania already has the highest rate of avoidable deaths of under-75s in the EU, according to EU statistics.

“The pandemic has not wiped out all other chronic or acute health problems,” Voiculescu said. “We need to make sure that all other patients have access to the medical services they need.”

Andrei, who became infected with HIV as a baby while being treated in a hospital, says he considers himself “one of the lucky ones.”

He has managed to pay privately for a few medical analyses in the past year. But he worries about his longer-term prospects if he doesn’t return to the close monitoring of his illness.

“The situation is critical,” he said. “If I keep blindly taking my treatment without proper monthly visits and analyses to check if the treatment is working … there is only one outcome — the loss of life.”