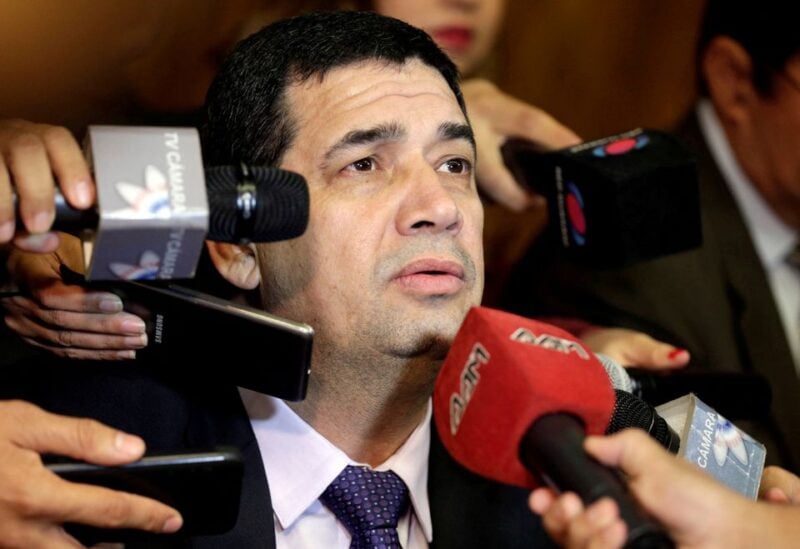 Hugo Velazquez, President of the Lower House of Congress, talks to the press before a session in Asuncion, Paraguay April 26, 2017

In less than a week of offering to resign after the US sanctioned him for “significant corruption,” including an alleged attempt to bribe a Paraguayan official,Paraguayan Vice President Hugo Velazquez said Thursday that he was withdrawing his resignation.
Paraguay’s vice president told reporters that he had “assumed” there was a domestic investigation against him.

On Wednesday, Velazquez was informed by the country’s prosecutor’s office that there was no case against him. He said that President Mario Abdo Benitez respected the decision to withdraw his resignation.

Velazquez said he was protected by the country’s constitution and cited “presumption of innocence” in his decision to withdraw his resignation before formalizing it. He said he “categorically” denied the accusations.

However, Velazquez said that this did not mean he would not resign, but that he was “interrupting” his resignation. He added that government and opposition lawmakers had requested that he defer his withdrawal from politics until details of the charges against him were available.

To this end, Velazquez said that he would request a report with “concrete information” from the US embassy in Asuncion. “I want to know who the official we tried to bribe was and what case I have a ‘financial interest’ in,” he said, claiming that Washington had “absolutely nothing” on him.

Although his resignation as vice president has not been finalized, Velazquez insisted that he remained steadfast in his decision to withdraw his candidacy from the ruling conservative Colorado Party’s presidential primaries. Paraguay is scheduled to hold its next general election in April 2023.

The former presidential hopeful had initially said he was offering his resignation to “protect” his party.
Last week, US Secretary of State Antony Blinken said Velazquez would be barred from entering the United States.

Blinken cited Velazquez’s alleged “involvement in significant corruption, including bribery of a public official and interference in public processes.”

A close friend of Velazquez, Juan Carlos Duarte, was accused of offering “a bribe to a Paraguayan public official in order to obstruct an investigation that threatened the vice president and his financial interests.” Duarte is a legal adviser to the company that runs the Yacyreta hydroelectric power station.

The US also blacklisted Velazquez’s and Duarte’s family members to prevent the possibility of asset transfers.

This is not the first time Washington has sanctioned Paraguayan political figures. Last month, former Paraguayan president Horacio Cartes, also of the Colorado Party, was barred from entering the US after being accused of corruption and ties with “terrorist organizations.”