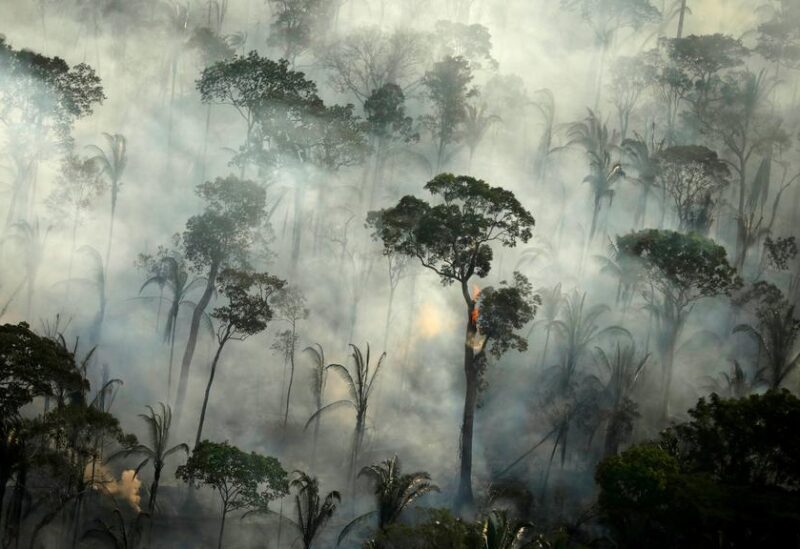 In a troubling sign for the fight against climate change, portions of the Amazon rainforest are now emitting more carbon dioxide than they absorb

Deforestation and an accelerating warming trend have contributed to change in the carbon balance, which is most severe in the southeastern region of the Amazon where there are both rising temperatures and reduced rainfall in the dry season. The most affected regions have warmed by 4.5 degrees Fahrenheit during the dry season in the last 40 years, comparable to the changes seen in the rapidly warming Arctic.

The Amazon region, home to the planet’s largest tropical forests, has served as an important absorber of carbon dioxide. Changing weather patterns have reduced its effectiveness as a buffer for climate change, and the conditions may be pushed even more by global warming, with still more carbon dioxide being released.

“This is a negative loop,” said Luciana Vanni Gatti, a scientist at Brazil’s National Institute for Space Research and an author of the paper, which was published Wednesday in the journal Nature.

In recent years, a growing number of studies have suggested that the region’s ability to remove carbon from the air and store it so it will not contribute to rising global temperatures is being degraded. A 30-year study in the journal Nature published in 2015 found that the Amazon’s ability to absorb carbon dioxide is showing “a long-term decreasing trend of carbon accumulation,” in part because of greater climate variability and earlier deaths of trees.

And a 2018 essay in the journal Science Advances warned that the combination of deforestation, climate change and burning have caused parts of the rainforest to shift to savanna: “The precious Amazon is teetering on the edge of functional destruction and, with it, so are we,” the authors wrote, adding, “we stand exactly in a moment of destiny: The tipping point is here, it is now.”

The research published Wednesday included measurements of carbon dioxide and carbon monoxide levels taken from small planes during about 600 flights between 2010 and 2018. The pilots flew to altitudes of a few miles above the tree canopy, then descended and took repeated measurements in the vertical column of air. The results showed the greatest changes to the ecological balance in areas that had suffered large-scale deforestation and had been heavily burned to dispose of dead trees and to clear land, Gatti said.

Thomas Lovejoy of George Mason University, an author of the “tipping point” essay, praised the new research, which he did not take part in. He said that there is hope for restoring balance, at least to a degree.

“The ability to build back a margin of safety” through reforestation is very real, he said, and could help bring back the role of trees in producing the moisture within the forests.

“I don’t think you’ll ever get it back to what it was, but you can certainly improve it,” he said.

The forests are a critical part of the region’s water cycle. Moisture put into the air by trees is responsible for as much as 35% of the region’s rainfall, according to some estimates.

By managing the forests with carbon sequestration, hydrology and biodiversity in mind, he said, “you get multiple benefits.” Referring to the changes to the Amazon, he said, “It’s come a lot sooner than anybody thought 30 years ago because of the extensive use of fire and climate change. But put some water in there, and it will change.”

Any changes may be long in coming and will face political opposition. President Jair Bolsonaro of Brazil has overseen skyrocketing deforestation in the Amazon. The government, under increasing pressure, has recently announced plans to counter the trend, but spikes in deforestation have continued.

In an accompanying article in Nature, Scott Denning, a professor in the department of atmospheric science at Colorado State University, wrote that the paper’s “atmospheric profiles show that the uncertain future is happening now.”

In an emailed response to questions, Denning praised the new study as the first real large-scale measurement — from various altitudes across thousands of kilometers and remote sectors — of the phenomenon, an advance beyond the traditional measurement at forest sites. The results show “that warming and deforestation in eastern Amazonia have reversed the carbon sink at regional scale and that the change is actually showing up in atmospheric CO2,” he wrote.

The research flights could be grueling. Gatti said that she took Dramamine before fights, but one colleague refused to get into the plane, saying that his wife was pregnant and “it’s too risky.” She replied, “I have two kids!”

Once the scientists trained pilots to use the equipment, she said, they would fly on their own. “It’s not easy,” she said. “But we need to do it.”

Noting that much of the cleared land in the most heavily affected area is used to raise cattle, she said her research has led her to stop eating beef.