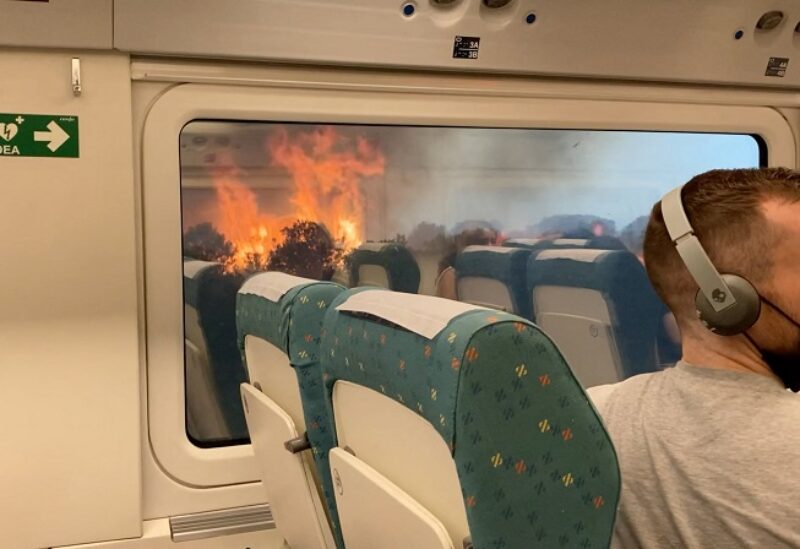 Passengers look at the wildfire from train, near Zamora, Spain, July 18, 2022, in this screen grab obtained from a social media video. Francisco Seoane Perez/via REUTERS THIS IMAGE HAS BEEN SUPPLIED BY A THIRD PARTY. MANDATORY CREDIT. NO RESALES. NO ARCHIVES.

Passengers on a train passing through the Spanish countryside were shocked, as they saw forests burning on both sides of the track. Francisco Seoane, who was travelling on the train, told Associated Press that they were afraid when they saw the neighbouring bushes on fire.

“It was really scary to see how quickly the fire spread. Just in the blink of an eye, a new bush began burning. It was a matter of seconds,” Seoane told Associated Press in an interview on Monday.
“It suddenly become night. And we could even smell the smoke inside the railcar,” he added.

The video, which was posted on social media by Seoane, showed the passengers in the car panicking while the bushes on both sides of the train were on fire and deep smoke clouded the sky.
Seoane also said that the passengers were left angry as there were no announcements on the train and the lack of any information also caused a lot of panic among the dozen people on board.
However, the train company made it clear to AP that none of the passengers were in any danger.

According to The Guardian, more than 30 forest fires have affected around 54,300 acres of land around Spain with at least two people losing their lives.