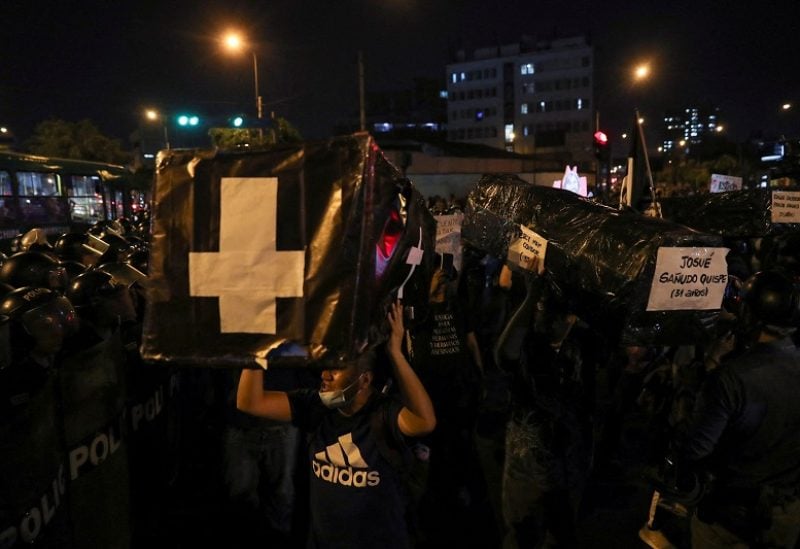 FILE PHOTO: Demonstrators carry mockup coffins with the names of people who have died during previous protests as they demand the dissolution of Congress and democratic elections, in rejection of Dina Boluarte as Peru's president, after the ouster of leftist President Pedro Castillo, in Lima, Peru, January 12, 2023. REUTERS/Sebastian Castaneda/File Photo

Apologizing for the continued political unrest that has shaken Peru for weeks, Peruvian President Dina Boluarte said in a televised address Friday night that she regretted the deaths of protesters.

However, the newcomer president insisted that she will not resign.

“My commitment is to Peru,” she said, blaming “violent and radical factions” for “provoking the population into chaos.”

Her first public statement since Monday comes after another day of protests and roadblocks across Peru. More than 40 people have been killed in anti-government protests that swept the country since she took power in early December.
The ouster and arrest of leftist former President Pedro Castillo last month triggered the widespread protests along with demands for fresh elections. Human rights groups have accused government security forces of using live ammunition against the protesters and dropping tear gas from helicopters.

The office of Attorney General Patricia Benavides on Friday said it would investigate violent clashes between security forces and protesters in the indigenous southern regions of Puno, Cusco, Arequipa, Apurimac and Ucayali, as well as in the capital, Lima.

Benavides has also opened a preliminary “genocide” investigation against the president and several ministers.

“I understand and share your indignation, the state has a great debt with the country,” Boluarte said in her Friday night address.

However, she avoided taking direct responsibility for the deaths, saying instead that bad actors pushed civilians into “confrontations” and that authorities would investigate.