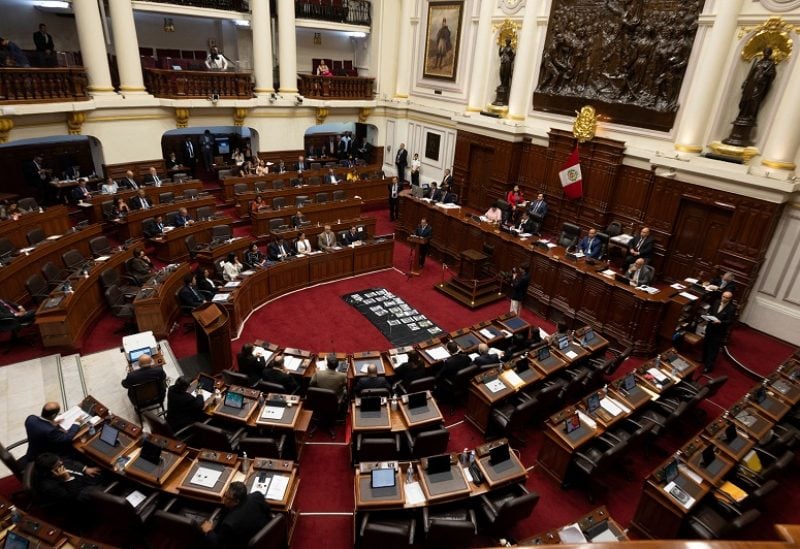 Peru's chief of staff Alberto Otarola speaks at the Congress as he and his cabinet face a vote of confidence in Lima, Peru, January 10, 2023. Cris Bouroncle/Pool via REUTERS

Aiming to suppress violent protests, a day after 18 people were killed in clashes between demonstrators and security forces, Peru announced a curfew in the southern Puno region on Tuesday.
Prime Minister Alberto Otarola said the three-day nighttime curfew would run from 8:00 p.m. to 4:00 am (0100 to 0900 GMT).
In total 40 people have been killed over a month of protests demanding the departure of President Dina Boluarte, who took over after the ouster and arrest of then president Pedro Castillo on December 7.
On Tuesday Peru’s prosecutor’s office said it was opening a genocide investigation against Boluarte and other top officials as a result of the deaths.
The Puno region that borders Bolivia and is home to many Aymara Indigenous people has become the epicenter of the protest movement led by Castillo supporters.
Overnight, protesters looted shops and attacked police vehicles in the region.
Most of the bloodshed there took place when protesters tried to storm the airport in the city of Juliaca that was being guarded by security forces.
Fourteen people were killed, many having suffered gunshot wounds, according to an official at a Juliaca hospital.
Three more people died during the ransacking of a shopping center in Juliaca while the last known victim was a police officer who the United Nations said died after his vehicle was set on fire.
The government has defended the actions of the security forces in Juliaca, claiming those guarding the airport faced down an organized attempted “coup” by thousands of demonstrators.
But UN Human Rights Office spokesperson Marta Hurtado called on authorities “to carry out prompt, impartial and effective investigations into the deaths and injuries, holding those responsible to account and ensuring victims receive access to justice and redress.”
Protests erupted a month ago when leftist Castillo — who was facing several graft investigations — was forced from office and arrested on charges of rebellion after attempting to dissolve parliament and rule by decree.
Tension had since been mounting in the cities of Puno and Juliaca where a week-long general strike has forced businesses to close.
Both cities are at elevations of around 3,800 meters (12,500 feet) near the high Andean border with Bolivia.
Demonstrators have set up road blocks in six of the country’s 25 departments. Officials say there are 53 separate road blocks.
In the southern Andean region of Ayacucho, thousands marched through the streets of the city of Huamanga demanding Boluarte’s resignation and new elections, which have already been brought forward from 2026 to April 2024.

The death toll brought a rebuke from the UN office in Peru, which expressed its “deep concern over the increasing violence.”
“We urge the authorities and security forces to take urgent measures to ensure the respect of human rights, including the right to protest peacefully,” it added.
Leaders of the Catholic Church, which is dominant in Peru, called the latest violence “a situation of war.”
“We are in the hands of barbarism,” Cardinal Pedro Barreto, the archbishop of the central city of Huancayo, told RPP radio station.
The Puno regional government declared three days of mourning over the recent deaths and called on Boluarte to resign.
On Wednesday, a delegation from the Inter-American Commission on Human Rights will visit Peru to investigate the protests and accusations of political repression.
On Tuesday, former Bolivia president Evo Morales, who is from the Aymara ethnicity and was his country’s first indigenous leader, called on Peru to end “the massacre of our brothers.”
On Monday, he was barred from entering Peru as the government accused him of trying to interfere in the country’s affairs.