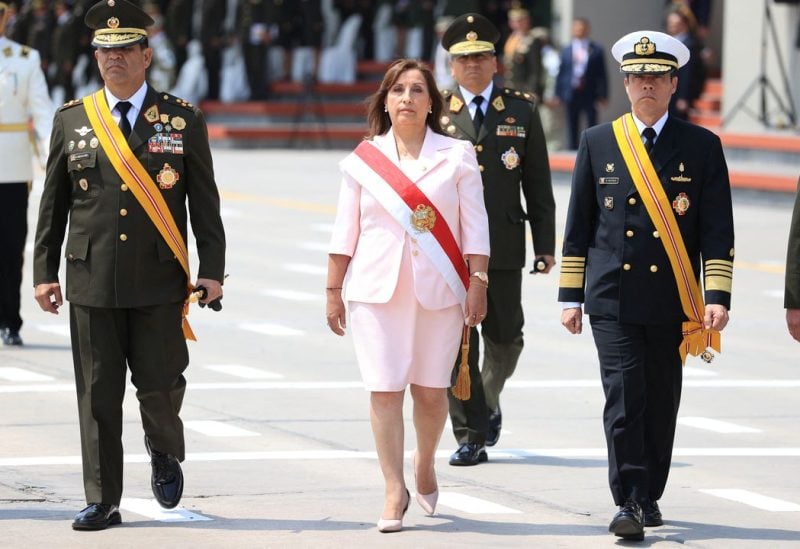 Peru's President Dina Boluarte attends a ceremony to commemorate the Day of the Peruvian Army and the anniversary of the Battle of Ayacucho, in Lima, Peru December 9, 2022. Peru's Presidency/Handout via REUTERS

Peru’s new President Dina Boluarte said early on Monday she would submit a bill to Congress to bring general elections forward two years to April 2024, amid protests in the Andean nation following the ouster of former leader Pedro Castillo.

Boluarte was sworn in last week after Castillo was sacked by Congress and arrested for trying to dissolve the legislature and prevent an impeachment vote against him in a day of political drama that roiled the world’s No. 2 copper producing nation.

“I have decided to present a bill to reach an agreement with Congress to bring forward the general elections to April 2024,” Boluarte, 60, said in a speech to the nation. “The homeland is experiencing difficult times.”

Boluarte said she would present the bill in “coming days” after two teenagers were killed and four people injured in Peru on Sunday during protests demanding the country hold general elections following the ouster of Castillo.

Demonstrators, many of them Castillo supporters, have for days demanded Peru hold new elections rather than allow Boluarte to stay in power until 2026, when Castillo’s term would have ended. Some protesters also called for Congress to be shuttered and for Castillo to be released.

The protests could be fanned further by the announcement from civil and indigenous groups of an indefinite strike starting Monday in Apurimac, home to major mines such as the Las Bambas copper project, owned by China’s MMG Ltd (1208.HK).

A source at Las Bambas, which has battled community blockades for years, said the company had no official comment but confirmed there had been more threats of blockades and a “radicalization” of protests against the firm by local communities.

Castillo, a former teacher and peasant farmer, had gained huge support in rural and mining areas that brought him into office in 2021. However, his administration was mired in allegations of corruption and he faced three impeachment trials.

‘HIGH CONFLICT’
Protests involving hundreds or thousands of people have been held since last week in cities in Peru’s interior and capital Lima, at times turning violent.

In Apurimac, authorities ordered the closure of the city’s airport after an attack on the weekend by protesters, police said. Sections of the main highway along Peru’s coast remained blocked on Monday in the southern regions of Ica and Arequipa.

Boluarte declared a “state of emergency” in the areas of “high conflict”, a measure that would allow the armed forces to take more control if necessary.

“I have given the instructions so that control of internal order can be recovered peacefully, without affecting the people’s fundamental rights,” said Boluarte, who lamented the deaths that had occurred in Apurimac.

Castillo, who has been under preliminary arrest since Wednesday, is being investigated by prosecutors for the alleged crime of “rebellion” and conspiracy.