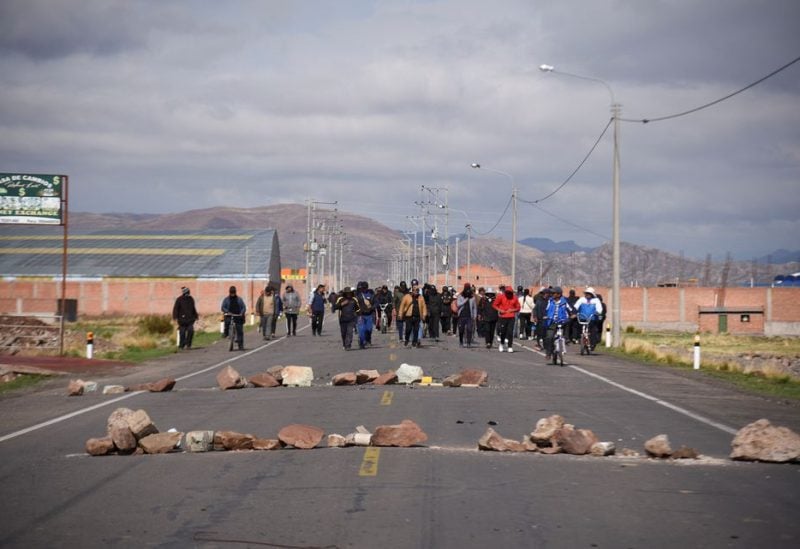 Several protesters attempted to take over an airport close to Peru’s border with Bolivia on Friday as part of anti-government demonstrations, which prompted police to fire tear gas to disperse them.

Images on social media and local television show that protesters set fire to a police tank outside Juliaca’s Inca Manco Capac airport. Juliaca is in the Puno region of Peru.

Protests against President Dina Boluarte resumed this week after a two-week pause, following violent clashes in December that left 22 dead after the removal and arrest of former President Pedro Castillo.

News outlets in Puno reported 15 injured, including two policemen. The healthy ministry did not immediately confirm the reports.

Andean Airports of Peru, which operates the Juliaca airport, said services were suspended “due to the violent acts and lack of security.”

In December, protesters forced the temporary closure of three airports in Peru.

Demonstrators demand Boluarte’s resignation, the closure of Congress, constitutional changes and Castillo’s release. The former president is serving 18 months in pre-trial detention while being investigated for “rebellion” after illegally trying to close Congress, a charge he denies.

Up to 49 blockade points were reported Friday in different regions of the country, an uptick from the day before, the Ombudsman’s office said in a statement.

In the Ica region, on Peru’s central coast, protesters have blocked a key highway, stranding dozens of passenger and cargo transport vehicles.

“We have already supported last year’s strike, we have been unemployed for about 10 days and the truth is, with the pandemic and all that there has been, we want to continue working,” said Jose Palomino, a driver affected by the roadblock.

The attorney general’s office said Friday it was assessing complaints against Boluarte and three of her ministers and, if warranted, would launch an investigation into deaths that occurred during December’s protests.

Boluarte welcomed the prosecutor’s announcement on Twitter, writing that she “will provide all the appropriate resources for the prompt clarification of the facts, as he has repeatedly requested.”