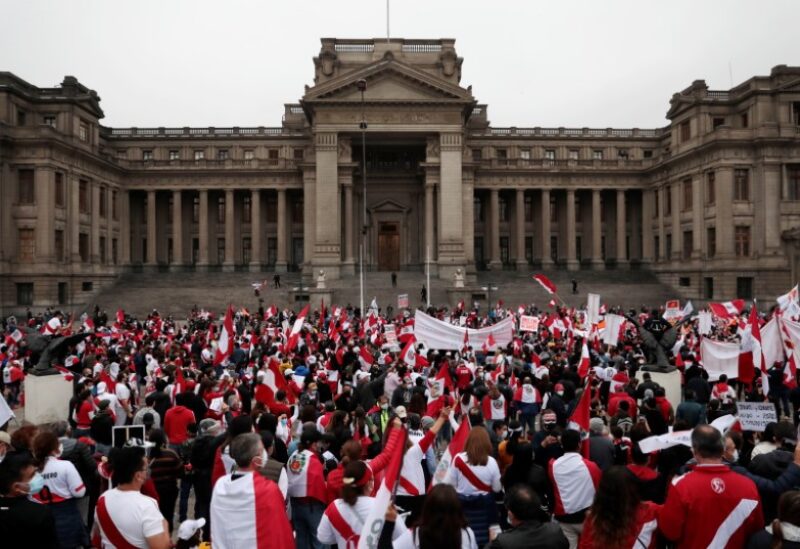 Supporters of Peru's presidential candidate Keiko Fujimori gather outside the Palace of Justice, the seat of Peru's Supreme Court, during a demonstration in Lima, Peru June 12, 2021. REUTERS/Alessandro Cinque

Keiko Fujimori, Peru’s right-wing presidential candidate who is expected to lose a runoff election to her socialist opponent, joined a rally in Lima on Saturday, calling for the annulment of ballots that did not favor her.

“If the (election) jury considers this, my friends, the election will be flipped,” Fujimori told thousands of supporters, many of whom were flying Peru’s red-and-white flag. “I’m the type of person that doesn’t give up easily.”

As the tally from the second round of voting earlier this month approaches a finish, front-runner Pedro Castillo, a member of the left-wing Free Peru party, is close to being declared the Andean country’s next president, despite Fujimori’s baseless charges of fraud.

On Saturday evening, Castillo, an elementary school teacher from a poor hamlet, was leading the vote count by 50,000 votes, with only about 16,000 votes left to count.

However, this week, Fujimori has increased his focus on claims of fraud, alleging that Castillo supporters stole ballots in rural areas where she received none. There was no indication of fraud, according to international observers, and the election was free and fair.

Fujimori says she has sought the annulment of 200,000 already-counted ballots, although the majority of those requests were submitted after a critical deadline, meaning they are unlikely to be considered.

“We won, teacher Pedro Castillo (is) President,” his party wrote on Twitter late on Friday.

Fujimori has also blamed the “international left” for pushing for a Castillo victory, citing how Argentina and Bolivia, countries led by left-wing leaders, have been quick to recognize the socialist candidate as Peru’s president-elect.

“Peru is a country that is strategically, geopolitically speaking, crucial in Latin America, and that is why the international left is trying this,” Fujimori said in a news conference with foreign media on Saturday morning.

Fujimori, the daughter of ex-President Alberto Fujimori, who is serving a jail sentence for human rights violations and corruption, is dealing with her own legal issues.

Prosecutors tried to re-indict her this week on money laundering charges, seeking a sentence of 30 years in prison. If Fujimori wins the election, the criminal case against her will be put on hold until the end of her presidency.

Even if Fujimori were to cancel some votes, the amount of ballots remaining in play makes it doubtful that she would be able to change the outcome.

The tense vote count is the culmination of a bitterly divisive election in Peru, where many low-income citizens supported Castillo while mostly wealthier ones voted for Fujimori.

On Friday, Peru’s electoral jury, which oversees elections in the country, tried to push back a deadline to allow Fujimori to submit requests to disqualify up to 200,000 votes cast in Peru’s poorest regions, but said in the afternoon that it had backtracked on that plan, paving the way for a Castillo victory.

On Saturday, Fujimori led a protest calling for the challenges to those 200,000 votes to be heard, an effort that Castillo has questioned.

On Friday night, Castillo tweeted, “We call on the (electoral jury) to guarantee and support a clean and just electoral process.” “The Peruvians have earned it.”

Fujimori first claimed fraud on Monday, when preliminary results from Sunday’s runoff election revealed she was set to lose by a razor-thin margin.

The prospect of a Castillo administration has worried investors, owing to his party’s Marxist-Leninist leanings.

He has recently embraced a moderate-left agenda, but it is uncertain whether his administration would maintain that tone or revert to the party’s far-left beginnings.