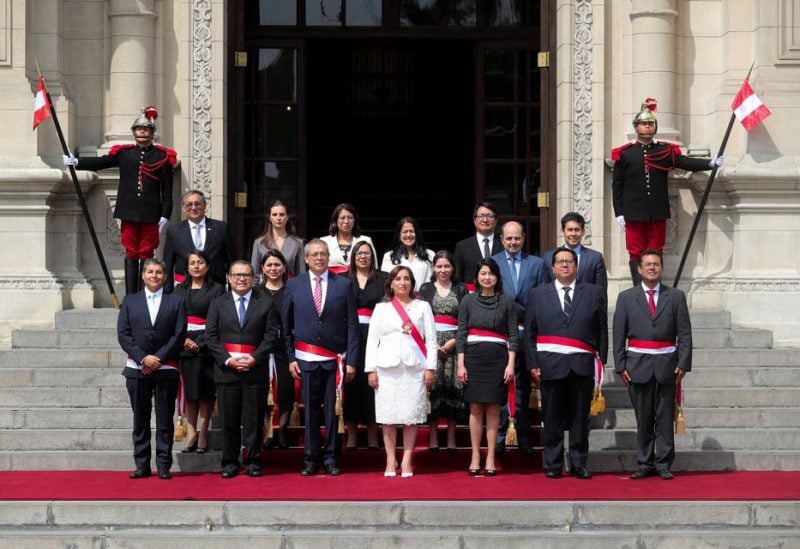 Peru's President Dina Boluarte, who took office after her predecessor Pedro Castillo was ousted, poses along with her new Cabinet in Lima, Peru December 10, 2022. REUTERS/Sebastian Castaneda

Peru’s new President Dina Boluarte named a cabinet on Saturday that includes a pro-market finance minister, as protests across the country intensified in response to the ouster of democratically elected former President Pedro Castillo.

Boluarte took office on Wednesday, after Castillo was removed from office by Congress and later arrested on rebellion and conspiracy charges for attempting to dissolve the legislature in order to prevent an impeachment vote.

She named former Deputy Finance Minister Alex Contreras, who is a career civil servant and is considered to have a pro-market stance, to serve as economy minister.

Chemical engineer Oscar Vera will serve as energy and mines minister, a key post for the copper-producing country.

“I have worked hard to form a cabinet for unity and democratic consolidation that meets the needs of the country,” Boluarte said in a televised address.

“I call for calm, tranquility and peace. Let us avoid conflicts that put our brotherhood as Peruvians at risk.”

Boluarte, a 60-year-old lawyer, was Castillo’s vice president. She became the country’s first woman president and will remain in office until 2026 if no new elections are called.

Castillo’s lawyer has denied the charges and called the former president’s detention illegal and arbitrary. He has requested asylum in Mexico and Mexican and Peruvian authorities are in consultation over the request, Mexico’s foreign minister said on Thursday.

Protesters are now demanding that the closure of Congress and that the country hold a democratic election rather than recognize Boluarte and allow her to finish Castillo’s term. They are also demanding that a new constitution be drafted.

Local television images showed demonstrations in some cities and a blockade on a section of the main highway along the Peruvian coast around 300 kilometers (186 miles) south of the capital Lima.

Some transportation agencies reported that they were limiting services to protect passengers.

Boluarte on Saturday wrote on Twitter that a clash on Friday night between protesters and security forces injured eight people, four of whom were police officers, adding that seven people were arrested.

On Friday, she said she was willing to discuss early elections, but ruled out kick-starting constitutional changes for the time being.