Philippines airlifts aid to areas cut off since earthquake 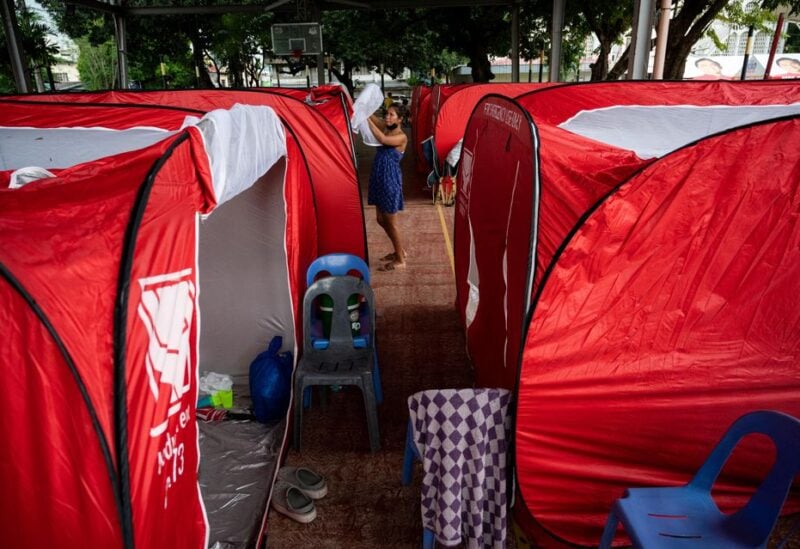 A woman prepares her modular tent after evacuating from her home in the aftermath of an earthquake in Bangued, Abra province, Philippines, July 28, 2022. REUTERS/Lisa Marie David

Authorities in the Philippines airlifted supplies to isolated regions on Friday in response to residents’ cries for food and makeshift shelter after a strong earthquake devastated the main island of Luzon this week.

The military announced that it has sent people and helicopters to give help to seven remote villages in the province of Abra.

Around 3,000 food packs were airlifted to the communities, Romel Lopez, spokesperson for the social welfare ministry, told DZMM radio station.

Residents were still camping out in parks and open spaces in some areas, with their nerves frayed by the regular aftershocks since Wednesday’s magnitude 7.1 earthquake that killed six people and injured more than 270 in the northern part of Luzon.

In Abra’s Bucloc town, which was cut off until Thursday evening, residents were worried about more landslides due to aftershocks and rain, former mayor Gybel Cardenas told Reuters.

The quake damaged nearly 1,600 homes and about 100 pieces of infrastructure, the state disaster agency said, noting there had been more than 1,000 aftershocks with a magnitude ranging from 1.5 to 5.4 recorded so far.

“Our problem is we have yet to receive any assistance. We need food, milk, water and medicines,” Gamalea Dimaampao, a resident in Bangued town in Abra, told DZMM radio.

Families, including children, were sheltering under torn tarpaulin sheets, exposing them to the rains, Dimaampao said.

In Lagangilang town, also in Abra, residents asked for temporary shelter and food.

“Many families are trying to fit into makeshift tents. Adults sleep while seated while children cry during aftershocks,” resident Leonora Baruela told DZMM.

Abra, an area of plunging valleys and rugged mountains that is home to nearly 250,000 people, has accounted for most of the reported landslides and damaged roads since the quake.

The Philippines is prone to natural disasters and is located on the “Ring of Fire”, a band of volcanoes and fault lines around the rim of the Pacific Ocean. Earthquakes are frequent and there are an average of 20 typhoons each year, some triggering deadly landslides.