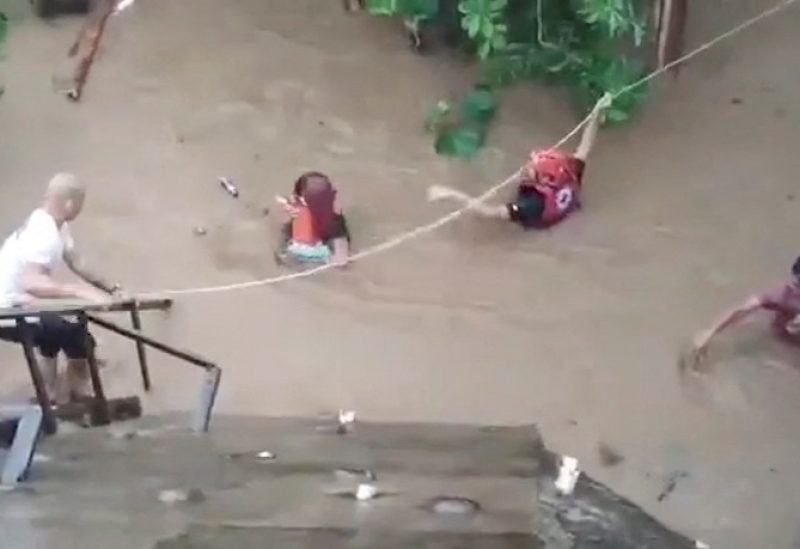 A rescuer helps people affected by floods in Gingoog city, Philippines December 25, 2022 in this screen grab obtained from a social media video. Philippine Red Cross/[email protected]/via REUTERS THIS IMAGE HAS BEEN SUPPLIED BY A THIRD PARTY. MANDATORY CREDIT. NO RESALES. NO ARCHIVES.

Philippino authorities said on Tuesday, that the death toll from heavy rains and floods in the Philippines climbed to 13 while 23 others are missing.
The Southeast Asian nation was hit by heavy rains over the weekend, ruining Christmas celebrations.
The country’s National Disaster Risk Reduction and Management Council said in a statement that floods left 13 dead while 23 are missing as heavy rains lashed at least six regions of the archipelago nation involving 18 provinces.
Six others were injured.
Heavy rains were recorded in Camarines Sur and Misamis Occidental provinces, as well as Eastern Visayas, Bicol, and Northern Mindanao regions.
The Filipino weather agency PAGASA said the cold and warm winds would continue to bring rain showers to Visayas, Caraga, Northern Mindanao, Zamboanga Peninsula, Basilan, Sulu, Tawi-Tawi, and Palawan, which “may trigger floods and landslides.”
According to the disaster agency, the flooding affected over 44,282 families involving more than 166,357 individuals.
Around 45,382 people were displaced due to the rains and floods and are now staying in 87 evacuation centers, it added.