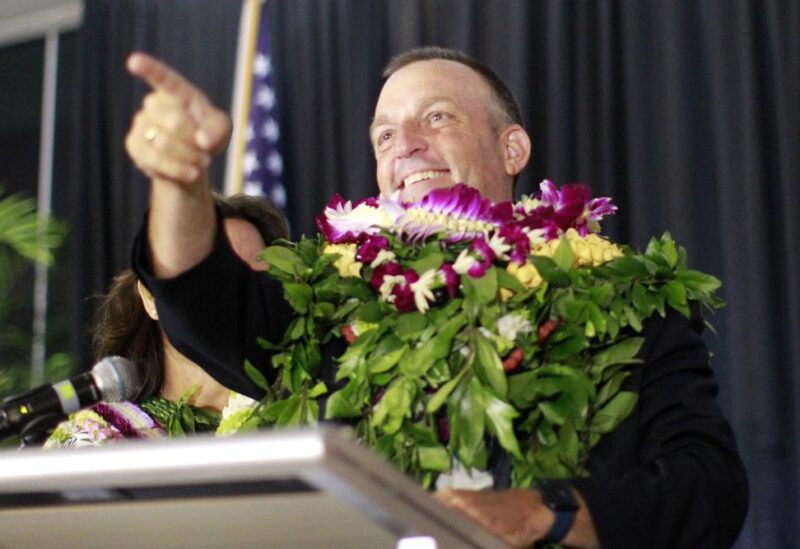 Democrats in Hawaii gave Josh Green and his wife Jaime a clear victory in the gubernatorial primary on Saturday in honor of their 16th wedding anniversary.

Vicky Cayetano, the state’s former first lady, and Kaiali’I Kahele, who opted to run for governor rather than a second term in the U.S. House, were soundly defeated by Green, the state’s current lieutenant governor.

Green, with lei of yellow and purple flowers and green leaves piled high up to his neck, alternated between throwing fists in the air and giving the shaka sign to a boisterous crowd of supporters at his victory party.

“On to November, we will win the governorship and lead Hawaii forward,” he said to the cheering crowd.

In an interview with Hawaii News Now, Aiona said his supporters “trusted my ability to lead the state, and I’m truly, truly appreciative and grateful for that.”

Green has served as second-in-command for the past four years to Hawaii Gov. David Ige, who has already served two terms and isn’t eligible to run for reelection.

The winner of the Democratic primary is favored to win the general election in the liberal state.

Many voters said Hawaii’s high housing costs were a top issue for them. During the COVID-19 pandemic, the median price of a single-family home topped $1 million in Honolulu, Maui and Kauai counties.

To address the housing shortage, Green said he would issue an executive order to eliminate red tape and streamline construction approvals and enforce existing laws to shut down illegal vacation rentals.

Aiona said he would eliminate the state Land Use Commission, which he blamed for slowing housing development.

“I’m from this island, been here all my life. I don’t want my children to move off this island because it’s too expensive and they can’t find a house,” Rowland said recently while holding a Green campaign sign and waving at passing cars in Honolulu.

Aiona supporter Viola Alipio said she believes he will address rising crime in the state. Earlier in his career, Aiona served as a Family Court judge and Circuit Court judge. He spearheaded the Hawaii Drug Court program, which offers rehabilitation to nonviolent offenders as an alternative to prison.

“I know him very well. I know his values — it all lines up to what my values are. Family, honesty, transparency,” she said at a recent Aiona sign-waving event in Kailua.

Green developed a following during the COVID-19 pandemic for his explanations of infection rates and trends and hospital treatment capacity.

The state’s largest unions endorsed his candidacy in the primary, including the Hawaii Government Employees Association and the Hawaii State Teachers Association.

Kahele drew attention this year for his own side job as a Hawaiian Airlines pilot and his heavy use of proxy voting in Congress. Like everyone who has voted by proxy, he submitted a required letter attesting he was “unable to physically” vote at the Capitol. He cited “the ongoing public health emergency.”

Green was born in Kingston, New York, and grew up in Pittsburgh. He moved to Hawaii with the National Health Service Corps in 2000.

Kahele’s decision to run for governor opened up his congressional seat representing rural Oahu and the Neighbor Islands.

Hawaii is a vote-by-mail state so voters began mailing their ballots and placing them in drop boxes across the islands late last month. Election clerks in each county made a few voter service centers available for people registering to vote at the last minute or voting in person.