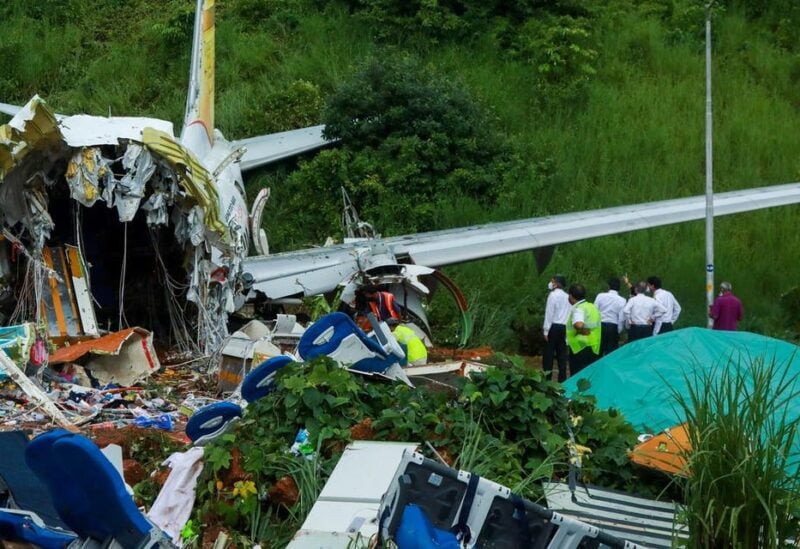 Officials inspect the wreckage of an Air India Express jet at Calicut International Airport in Karipur, Kerala, on August 8, 2020. (AFP)

Pilot error and a failure to follow safety guidelines probably caused the Air India Express crash that killed 21 people last year, the country’s worst aviation accident in a decade, investigators said in a report on Saturday.

The Boeing 737, repatriating Indians stranded in Dubai due to the coronavirus pandemic, overshot the table-top runway and crashed while landing at Calicut International Airport in the southern state of Kerala in heavy rain on Aug. 8, 2020.

“The probable cause of the accident was the non-adherence to standard operating procedures by the pilot flying,” says the report by the Aircraft Accident Investigation Bureau, a division of the Ministry of Civil Aviation that probes plane accidents.

The pilot “continued an unstabilized approach and landed beyond the touchdown zone, halfway down the runway”, instead of doing a “go around”, the agency says in the 257-page report, published after a year-long investigation.

A go-around is a standard procedure in which the pilot abandons a landing attempt deemed unsafe and tries again.

In spite of being asked to go around by the pilot monitoring the landing, the pilot flying the aircraft failed to do so, the agency said, and the monitoring pilot also failed to take over the controls and execute the order.

The aircraft had already made one failed attempt to land before it overran the 2,700-meter (8,900-foot) runway. The airport is known as a table-top because its runways have steep drops at one or both ends.

The crash at the airport in Kozhikode was India’s worst passenger aircraft accident since 2010, when another Air India Express flight from Dubai overshot a table-top runway in Mangalore, a city in the south, and slid down a hill, killing 158 people.