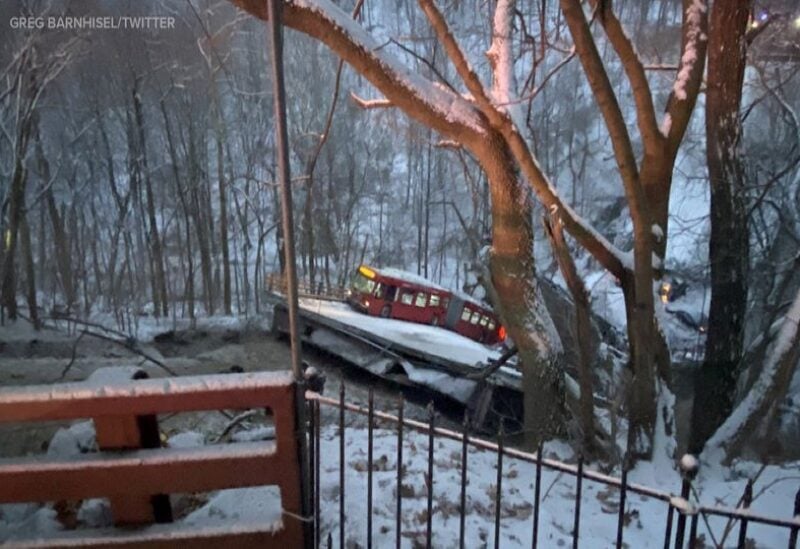 On Friday, a bridge in Pittsburgh collapsed just hours before US President Joe Biden was scheduled to visit the old steel metropolis to demonstrate his efforts to restore infrastructure, supply networks, and revitalize US industry.

Mr. Biden’s favor ratings have dipped in recent months due to a spike in the Covid-19 epidemic and rising inflation, but he received a lift on Thursday when the Commerce Department predicted that the US economy will grow at its quickest rate in nearly four decades in 2021.

A snow-covered bridge in Pittsburgh’s Frick Park fell hours before Mr. Biden’s arrival, according to police.

KDKA television uploaded a shot on social media showing many automobiles buried in the wreckage of the collapsed roadway at the foot of a forested slope. At least one vehicle, which seemed to be a bus, was dangling over the bridge’s edge. A heavy odor of natural gas filled the neighborhood, according to a tweet from Pittsburgh Public Safety.
According to Pittsburgh Bureau of Fire Chief Darryl Jones, three or four automobiles were involved in the collapse, and there were 10 minor injuries, three of which were sent to the hospital. Mr Jones stated that none of the injuries were life-threatening.

According to White House press secretary Jen Psaki, Biden has been briefed about the bridge collapse and will continue with his trip as planned.

“The president will proceed with today’s trip and will be in touch with authorities on the ground regarding any support we can give,” she added.

According to one witness who spoke to KDKA, the date of Biden’s arrival was “an extraordinary coincidence.”

The Democratic president will tour Mill 19, a former steel mill facility that is now a research and development centre, before celebrating the US economy’s impressive comeback from the epidemic, according to the White House.

“The president will discuss the economic progress we’ve made in his first year in office, including the fastest single year of job growth in American history, the largest unemployment drop on record, and the fastest economic growth in 2021 in nearly four decades,” a White House official said.

Returning to the location of his first campaign event in 2019, Biden will highlight the creation of 367,000 manufacturing jobs since taking office a year ago, as well as the approval of a $1 trillion infrastructure plan, a rare bipartisan win in a bitterly divided US Congress.

According to the person, the president will also discuss his efforts to revive American competitiveness and overcome China in the contest to dominate the global economy.