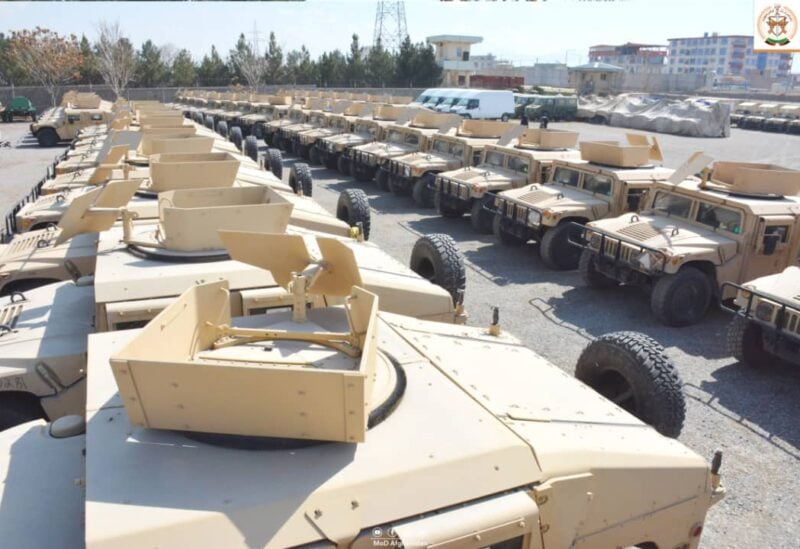 Military vehicles transferred by the U.S. to the Afghan National Army in February 2021. Aghanistan Ministry of Defense/via REUTERS

Afghanistan’s military ministry shared photos of seven brand new helicopters arriving in Kabul from the United States on social media around a month ago.

“They’ll see a constant drumbeat of that type of assistance moving ahead,” US Defense Secretary Lloyd Austin told reporters at the Pentagon a few days later.

The Taliban, on the other hand, had taken the majority of the nation in a couple of weeks, as well as any weapons and equipment left behind by retreating Afghan forces.

“Everything that hasn’t been destroyed is the Taliban’s now,” one U.S. official, speaking on the condition of anonymity, told Reuters.

Current and former U.S. officials say there is concern those weapons could be used to kill civilians, be seized by other militant groups such as Islamic State to attack U.S.-interests in the region, or even potentially be handed over to adversaries including China and Russia.

The administration of President Joe Biden is so concerned about the weapons that it is exploring a variety of alternatives.

Airstrikes on bigger equipment, like as helicopters, have not been ruled out, according to sources, but there is fear that doing so might aggravate the Taliban at a time when the US’ primary aim is to evacuate people.

While no exact figures have been released, another official stated that the Taliban are thought to have control of over 2,000 armored vehicles, including U.S. Humvees, as well as up to 40 aircraft, including UH-60 Black Hawks, scout attack helicopters, and ScanEagle military drones.

“We have already seen Taliban fighters armed with U.S.-made weapons they seized from the Afghan forces. This poses a significant threat to the United States and our allies,” Representative Michael McCaul, the top Republican on the U.S. House of Representatives Foreign Affairs Committee, told Reuters in an email.

The speed with which the Taliban swept across Afghanistan is reminiscent of Islamic State militants taking weapons from U.S.-supplied Iraqi forces who offered little resistance in 2014.

Between 2002 and 2017, the United States gave the Afghan military an estimated $28 billion in weaponry, including guns, rockets, night-vision goggles and even small drones for intelligence gathering.

But aircraft like the Blackhawk helicopters have been the most visible sign of U.S. military assistance, and were supposed to be the Afghan military’ biggest advantage over the Taliban.

Between 2003 and 2016 the United States provided Afghan forces with 208 aircraft, according to the U.S. Government Accountability Office (GAO).

Many of those planes were crucial in helping Afghan pilots flee the Taliban in the previous week.

Afghan pilots seeking sanctuary have flown between 40 and 50 planes to Uzbekistan, according to a US official. The Taliban had begun an assassination campaign against pilots even before taking power in Kabul over the weekend.

Some planes were in the US for repair and will remain there. Those en way to Afghan forces will instead assist in the evacuation of Kabul by the US military.

Current and former officials say that while they are concerned about the Taliban having access to the helicopters, the aircraft require frequent maintenance and many are complicated to fly without extensive training.

“Ironically, the fact that our equipment breaks down so often is a life-saver here,” a third official said.

Retired U.S. Army General Joseph Votel, who oversaw U.S. military operations in Afghanistan as head of U.S. Central Command from 2016 to 2019, said most of the high-end hardware captured by the Taliban, including the aircraft, was not equipped with sensitive U.S. technology.

“In some cases, some of these will be more like trophies,” Votel said.

There is a more immediate concern about some of the easier- to-use weapons and equipment, such as night-vision goggles.

Since 2003 the United States has provided Afghan forces with at least 600,000 infantry weapons including M16 assault rifles, 162,000 pieces of communication equipment, and 16,000 night-vision goggle devices.

“The ability to operate at night is a real game-changer,” one congressional aide told Reuters.

Votel and others said smalls arms seized by the insurgents such as machine guns, mortars, as well as artillery pieces including howitzers, could give the Taliban an advantage against any resistance that could surface in historic anti-Taliban strongholds such as the Panjshir Valley northeast of Kabul.

U.S. officials said the expectation was that most of the weapons would be used by the Taliban themselves, but it was far too early to tell what they planned to do – including possibly sharing the equipment with rival states such as China.

Andrew Small, a Chinese foreign policy expert at the German Marshall Fund of the United States, said the Taliban was likely to grant Beijing access to any U.S. weapons they may now have control over.

According to one American source, China is unlikely to gain much because it already has access to the weapons and equipment.

Experts believe the event demonstrates that the US needs a better mechanism to track the technology it sends to allies. According to Justine Fleischner of Conflict Armament Research in the United Kingdom, it might have done a lot more to guarantee that supplies to Afghan forces were properly supervised and inventoried.

“However, the time for these initiatives to have any effect in Afghanistan has past,” Fleischner added.