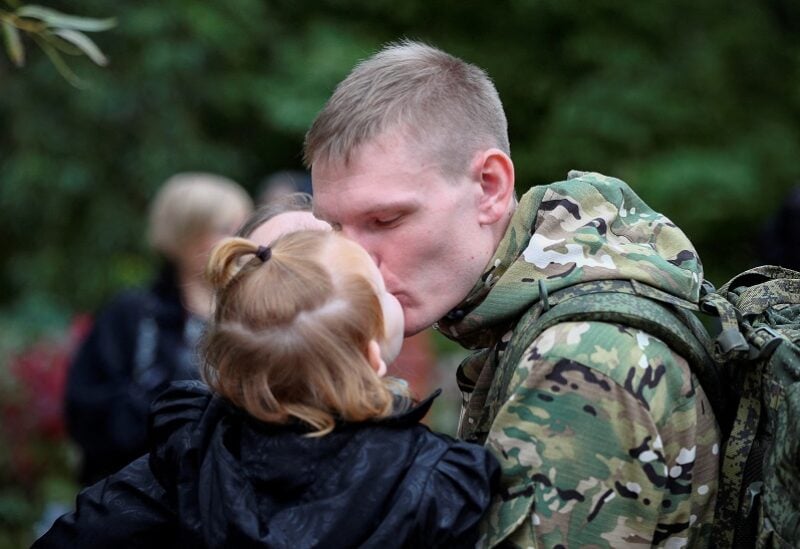 A Russian reservist bids farewell to relatives before his departure for a base in the course of partial mobilization of troops, aimed to support the country's military campaign in Ukraine, in the town of Volzhsky in the Volgograd region, Russia September 28, 2022. REUTERS/Stringer TPX IMAGES OF THE DAY

Poland and Bulgaria on Tuesday (September 28) urged their citizens to leave Russia, in the aftermath of exodus of Russians fleeing the country to escape military mobilisation, reported The Guardian. As more and more people flee Russia, border crossing into neighbouring countries may get difficult in the coming days.

Bulgaria’s Ministry of Foreign Affairs said in a statement that it “Calls for refraining from traveling to the Russian Federation and recommends that Bulgarian citizens in the Russian Federation consider the possibility of leaving the country as soon as possible, using currently available means of transport”.

As per Polish outlet TVP, country’s foreign ministry has made a similar appeal to its citizens. Poland said that flights with Russia had been suspended.

Russia invaded Ukraine on February 24. After initial successes, Russian forces have had to retreat in some area in the face of Ukrainian counter-attack. Russian President Vladimir Putin has ordered a partial military mobilisation. Soon after the mobilisation was announced, reports of Russians fleeing the country have hit headlines all over the world.

Meanwhile in Ukraine, Russian-backed authorities claim to have carried out the referendums over five days on territory that makes up around 15% of Ukraine.

Residents who escaped to Ukrainian-held territory in recent days have told of people being forced to tick ballots in the street by roving officials at gunpoint. Footage filmed during the exercise showed Russian-installed officials taking ballot boxes from house to house with armed men in tow.

Russia says voting was voluntary and in line with international law, and turnout high.