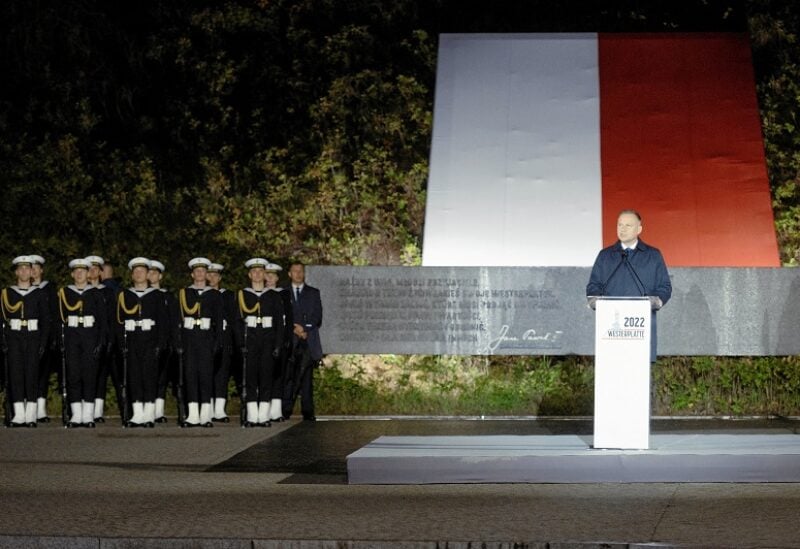 Polish President Andrzej Duda delivers a speech during a ceremony to mark the 83rd anniversary of the outbreak of World War Two at Westerplatte Memorial in Gdansk, Poland September 1, 2022. Bartosz Banka/Agencja Wyborcza.pl via REUTERS ATTENTION EDITORS - THIS IMAGE WAS PROVIDED BY A THIRD PARTY. POLAND OUT. NO COMMERCIAL OR EDITORIAL SALES IN POLAND.

Leader of Poland’s ruling conservative Law and Justice (PiS) party, Jaroslaw Kaczynski, said on Thursday, that parliamentary committee found the losses amounted to 6.2 trillion zlotys (roughly $1.32 trillion or €1.32 trillion) and added that Poland would officially demand reparations.
The sum, which represents around one-third of Germany’s present-day GDP and around one-sixth of global GDP during the war itself, is higher than previous estimates of around €850 billion from members of the nationalist PiS party.

“The sum that was presented was adopted using the most limited, conservative method, it would be possible to increase it,” Kaczynski said in Warsaw.

The report was released to coincide with the anniversary of Germany’s September 1, 1939 invasion of Poland, now broadly perceived as the start of what would become World War II. Poland was also invaded by the Soviet Union from the east roughly two weeks later, as part of a then-secret deal between Hitler’s Germany and Stalin’s Soviets carving up eastern Europe between them.

Some 6 million Poles, including roughly 3 million Polish Jews, were killed during the war and Warsaw was razed to the ground following a 1944 uprising in which about 200,000 civilians died.

Prime Minister Mateusz Morawiecki also attended Thursday’s ceremonial release of the report at the Royal Castle in Warsaw, rebuilt from wartime ruins. Though Morawiecki is the head of the government, party leader Kaczynski is still seen as the driving force within PiS.

Germany has previously said that all reparations questions had been settled in prior agreements. PiS has often floated the idea of claiming more, but to date had not done so formally.

The issue has strained often prickly bilateral relations in recent years. And the war in Ukraine has prompted renewed criticism of Germany from Warsaw, which blames Berlin for strategic errors including an excessive reliance on Russian energy and being too slow to provide weapons to either Ukraine or Poland itself.
Polish opposition leader and former Prime Minister Donald Tusk said earlier on Thursday that in his view, the government was not really concerned with reparations from Germany, but was trying to drum up support domestically.

“PiS leader Jaroslaw Kaczynski makes no secret of the fact that he wants to build up support for the ruling party with this anti-German campaign,” Tusk said.

Poland’s handling of World War II history has become increasingly internationally contentious since PiS came to power. The governments of Israel, Germany and others have repeatedly clashed over a series of laws, such as preventing Jewish families from trying to reclaim property seized during the Holocaust and outlawing mentions of some Polish participation in the Holocaust. Warsaw later removed the possibility for a jail term or criminal penalties for saying this, after the US threatened to downgrade its relations with Poland over concerns on free speech.