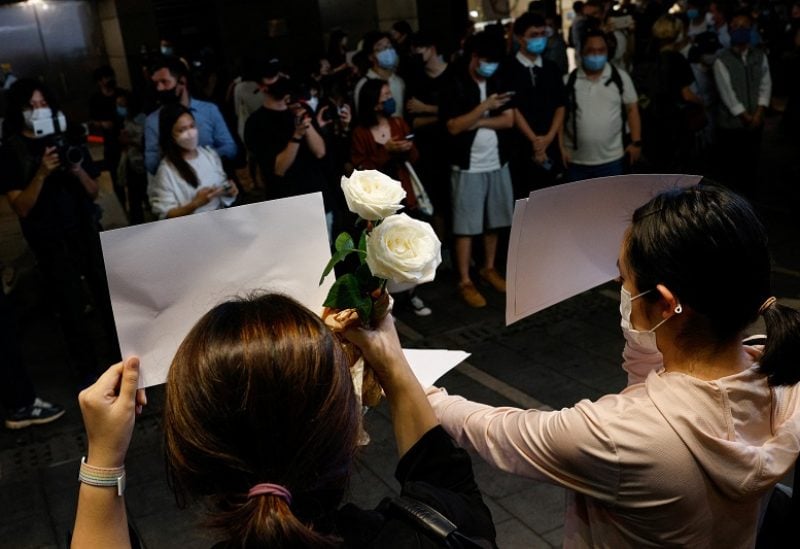 People hold white sheets of paper and flowers in protest over coronavirus disease (COVID-19) restrictions in mainland China, during a commemoration of the victims of a fire in Urumqi, in Hong Kong, China November 28, 2022. REUTERS/Tyrone Siu

As Covid curbs have disrupted the lives of millions or people in the country and damaged the economy, China was taking all possible steps to prevent escalation of Covid protests in the country on Tuesday. The police were out in force in Beijing and Shanghai to keep protesters away who even called for Xi Jinping to step down as president. However, Beijing doesn’t seem to be in the mood to loosen restrictions.

At least one person in the city of Hangzhou was arrested late on Monday, according to social media videos. Earlier, reports suggested that busload of demontrators were taken away by police during Sunday night protests in Shanghai. On Monday, the police stopped and searched people at the sites of weekend protests.
The people are reportedly also being asked to show their phones to check if they have virtual private networks (VPNs) and the Telegram app, the platform used to spread the message about the protests. While VPN is illegal in the country, Telegram app is blocked from China’s internet. A video also showed police arresting a man while a group of people around them try to pull back the person being detained.

In Hangzhou, the capital of the eastern Zhejiang province, hundreds of police occupied a large public square on Monday night to stop people from gathering, social media videos suggested.

On Tuesday morning, in Shanghai and Beijing, police patrolled those areas where people could gather again, as per messages being circulated on the Telegram app. Their presence on Monday evening and throughout the night ensured no more gatherings took place.
On Sunday evening, people gathered near a riverbank in Beijing to hold a vigil for victims of a deadly apartment blaze in north-western China’s Xinjiang region. The fire in Urumqui is what led to the protests flaring up in the country with people saying that Covid curbs led to a delay in rescue operations.

One of them told AFP that she and five of her friends had received calls from police to know about their movements. One of them was also visited by the police who asked “whether I went to the Liangma river last night … he asked very specifically how many people were there, what time I went, how I heard about it,” she told AFP.

“The police stressed that last night’s protest was an illegal assembly, and if we had demands then we could submit them through the regular channels.”

On Sunday, a large crowd gathered in the southwestern metropolis of Chengdu and chanted, “We don’t want lifelong rulers. We don’t want emperors.” Anti-Xi slogans were briefly heard in Shanghai on Sunday as well.