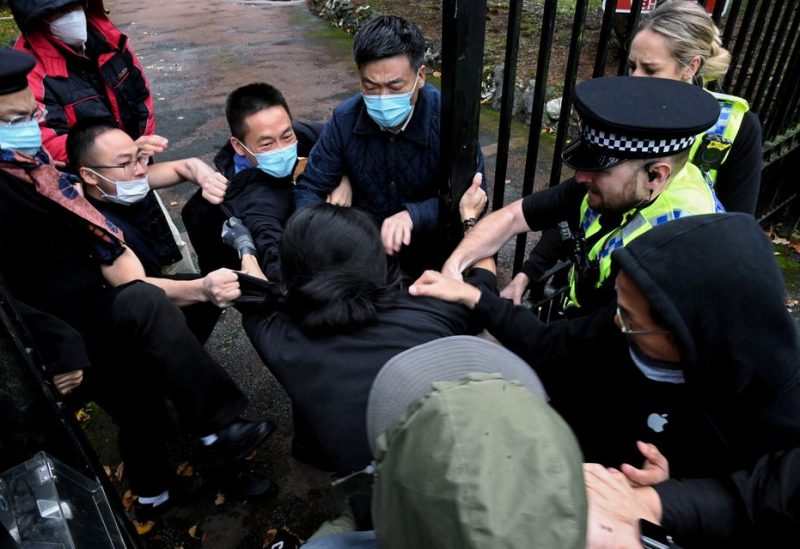 A man is pulled at the gate of the Chinese consulate after a demonstration against China's President Xi Jinping, in Manchester, Britain October 16, 2022. Matthew Leung/The Chaser News/Handout via REUTERS

Manchester police are investigating an incident in which a demonstrator seemed to have been dragged into the grounds of the Chinese consulate and assaulted following a rally against Chinese President Xi Jinping.

A guy was seen being dragged through a fence into the Chinese consulate grounds in Manchester by several men, and then thrashed by numerous attackers, according to video footage shared online. Police on the scene ultimately broke down the barrier and dragged the man out.

Several protest banners had earlier been placed outside the consulate, one with the words, “Heaven will destroy the Chinese Communist Party”, and a caricature of Xi wearing a crown, according to pictures provided to Reuters by a freelance journalist on the scene.

The protest took place on the first day of the twice-a-decade congress of China’s ruling Communist Party in Beijing, during which Xi is widely expected to win a third leadership term.

Matthew Leung, a freelance journalist on the scene and friend of the man who was beaten, told Reuters by phone he was “shocked” by the incident.

The man who was beaten, who Leung said is known by the first name, Bob, had cuts to his face afterwards, Leung said. The man didn’t immediately respond to a Reuters request for comment via a messaging app.