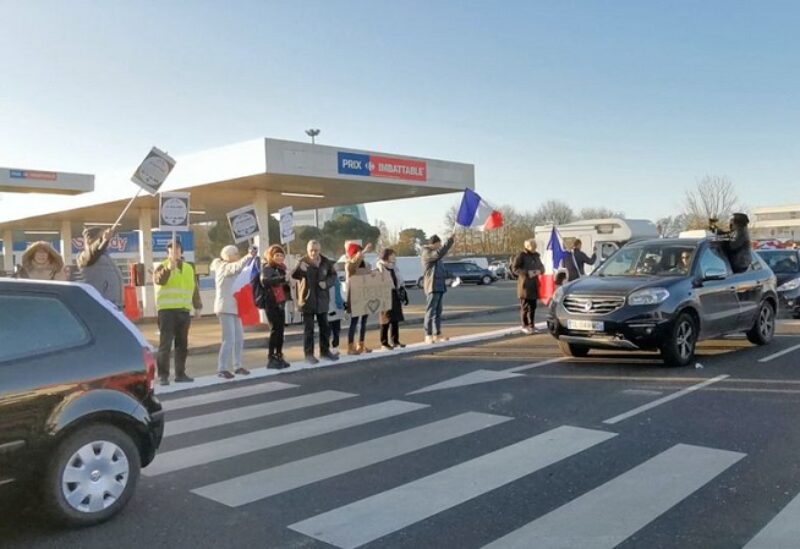 People gather as a vehicle convoy with French and Canadian flags passes, in Nantes, France, February 11, 2022 in this still image obtained from a video posted on social media. Photos Souvenir/via REUTERS

Police said they stopped 500 vehicles that were trying to get into Paris on Saturday in a ‘freedom convoy’ protest against COVID-19 restrictions.

The vehicles were intercepted at various entry points into the French capital and nearly 300 tickets handed out to their occupants by mid morning, police said on Twitter.

Inspired by horn-blaring “Freedom Convoy” demonstrations in Canada, the motorists – from numerous cities across France – were seeking to defy a police order not to enter the city.

Less than two months from a presidential election, President Emmanuel Macron’s government is eager to keep protests from spiralling into large-scale demonstrations like the anti-government “yellow vest” protests of 2018.

A police motorcycle patrol stopped two camper vans and a truck from the convoy that had made it as far as the prestigious Champs Elysees avenue in central Paris.

Separately police also said they had arrested two protesters in southern Paris in possession of petrol cans, hammers and knives.

Police have mobilised thousands of officers, set up checkpoints and deployed armoured personnel carriers and water cannon trucks in preparation for the protests.

The French protests are against rules requiring a vaccine pass to get into many public places and come after months of regular demonstrations against the pass in Paris and other cities.

The yellow vest movement which began as a protest against fuel taxes grew into a broader revolt that saw some of the worst street violence in decades and tested Macron’s authority.

Police have allowed two street marches by anti-vaccine and yellow vest demonstrators to go ahead in Paris on Saturday afternoon.